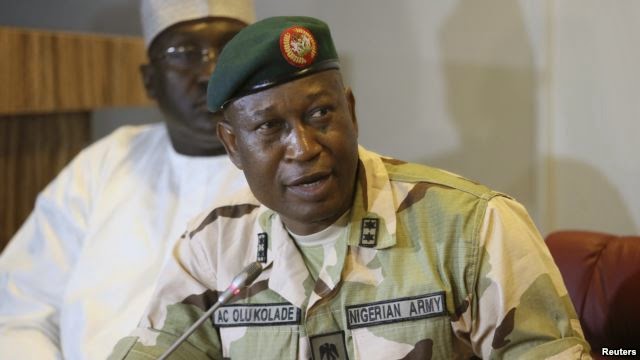 Olukolade, director of defense information, said the Joint Task force is also adjusting its maneuvers to counter what seems to be a new Boko Haram fighting strategy of using guerilla warfare suicide bombings.

This comes as latest reports say Boko Haram gunmen attacked an island on the Niger side of Lake Chad Monday, with locals reporting heavy casualties.

“The offensive on the terrorists is continuing as planned and achieving required results. All the identified cells have been either bombarded or assaulted on the ground, and those operations that have been completed are undergoing cordon and search by troops with the view to recovering all arms in their (rebels) possession, and also apprehending anyone of the rebels who might be hiding, and recovering all arms that may be in their possession,” he said.

Olukolade said the military is aware that, as the insurgents retreat from the onslaught, they are adopting new tactics in the form of suicide bombings and guerrilla warfare.

He said one explanation for the recent military successes against Boko Haram is training coupled with adjustment in military tactics.

“This has been the pattern of their operation. Before now, they have decided to adopt the style of ISIS, wanting to hold on to territories. What they were doing [lately] has been more of guerrilla warfare. And we are adjusting our tactics to contain them accordingly,” Olukolade said.

Olukolade said Boko Haram will not be able to divide the coalition by its cross-border attacks.

“This coalition is also meant to confront that type of situation in a sense that any [of] these countries that come under attack the joint task force will go after them and assist wherever in containing them,” Olukolade said.

The six-minute video has similarities to those produced by the Islamic State group and also features the black IS flag flying in the upper right-hand corner.

The video, entitled Harvest of Spies, shows masked militants with long knives standing behind two men forced to kneel on the ground. Before his beheading, one of the men identified himself as Dawoud Muhammad of Baga city in northeastern Nigeria. He said he accepted the equivalent of $25 from a police officer to spy.

The video does not show the moment of the killings. Instead, militants are seen placing the men’s separated heads onto their prone bodies.