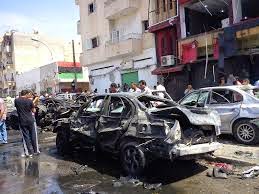 A car bomb explosion killed three, including the driver and a child, in the eastern Libya city of Benghazi, Reuters reported. Approximately 20 others were injured in the explosion.

The car appeared to be driving toward an army tank base, but it detonated in the conflict-ridden neighborhood of Lithi before reaching the target.

The suicide-bombing occured the day after clashes erupted between pro-government and Islamist militias in a battle for control over a major Benghazi port.

Benghazi has faced ongoing violence since the ousting of Colonel Gaddafi in 2011.

The country currently has two governments battling for power: the internationally-recognized government based of Prime Minister Abdullah al-Thinni and the Islamist coalition known as Libya Dawn.