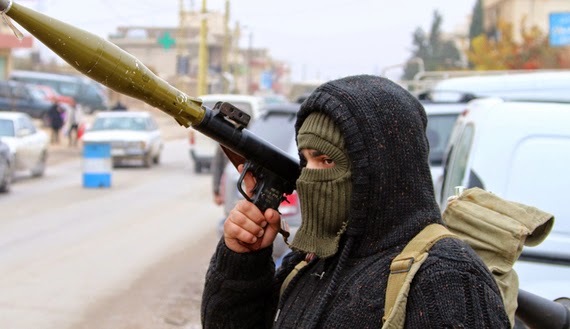 Predicting what is happening in the caves and caverns of the Qalamoun Mountains is somehow impossible these days. The intermittent news coming from the area is insufficient to draw a clear picture of the secrets and mysteries that could at any moment explode, spill over to the surrounding barren lands and set the region ablaze.
Although the town of Arsal and its desolate lands have already had their share of violence, this does not by any means imply that they have gained immunity against the explosions or that the conflict is over.Two surprising developments emerged over the past two days and interrupted the ordinary course of events in the region extending from Syria’s Qalamoun Mountains to Lebanon’s Arsal area. The situation has taken on a confrontational character between the Lebanese army and Hezbollah on the one hand, and Jabhat al-Nusra and the Islamic State (IS) on the other, as other elements suddenly joined the conflict. This may further complicate the situation in the region and lead to more serious consequences.The first development was announced by Jaysh al-Islam commander Zahran Alloush, who tweeted that his insurgents carried out “the first counterattack in Arsal,” and that “Jaysh al-Islam set an ambush for IS fighters who had stormed their headquarters. They killed and wounded three and took out the eye of a fourth person.”

This was the first time Jaysh al-Islam had officially declared its presence outside Syrian territory and that it had a base in the city of Arsal. It was also the first time it had declared that the organization, known for its links with Saudi Arabia, carried out a military attack across the Syrian border. Most importantly, Alloush’s tweet indicates that this attack will have repercussions and that the battle waged against the IS expansion in Ghouta and Qalamoun had already moved into Lebanese territory. This is a dangerous and unprecedented evolution in the Syrian crisis so far.

Strangely enough, Alloush, who, once again, threatened on Jan. 3 to target Damascus with rockets on Jan. 4 in response to the bombing of Ghouta, claimed that his attack in Arsal came in response to the storming of IS fighters of one of its headquarters, of which there was no further news. Does this mean that a secret war was fought between the two parties in Arsal and that Alloush decided to bring it out into the open? Was the bombing that targeted an IS security office in Arsal about 10 days ago part of this war, or are there other parties that do not want to be revealed?

It is worth mentioning that Alloush’s announcement came as a surprise to those who follow the news on Qalamoun. Many of them said this announcement was unexpected, and they pointed out they had no idea that Jaysh al-Islam had reached Arsal.

Jaysh al-Islam had opposed the attacks launched by armed factions on Arsal last August. It said that this would serve Hezbollah’s agenda, which seeks — according to a statement issued by Jaysh al-Islam commander in western Qalamoun, Abu Khalid — to break into the barren lands of Qalamoun. Are these the real reasons behind the objection of Jaysh al-Islam to the attack, or is the organization trying to protect its Arsal bases from IS?

The second development was made public via a tweet by Abu Musab Hafid al-Baghdadi, who is one of IS’ media representatives in western Qalamoun. Hafid al-Baghdadi said the Free Syrian Army a few days ago had arrested ​Jabhat al-Nusra’s emir in Qalamoun, Abu Malik al-Talli, along with a number of “legal officials,” in the wake of an altercation that occurred between the two parties. Hafid said that everyone was subsequently released.

Hafid started the hashtag #FreeArmyArrestedAbuMalikTalli, but it was not widely used. In addition, there is no data that confirms or denies this news, and it could be part of the media war waged by the two parties against each other.

What is more important than the accuracy of this story is that it came in the context of a violent attack launched by “IS journalists” on Jabhat al-Nusra in general, and its commander in Qalamoun in particular. This indicates that the tension between the two parties is ongoing, contrary to what has been stated by some reports, which mentioned some kind of rapprochement between the two following the violent tremor caused by mutual statements that accused the other of arrogance and being infidels. These were issued against the backdrop of the appointment of a new IS official, namely Abu al-Walid al-Maqdisi.

“There will be no unity with infidels; the front of IS leader [Abu Mohammed] al-Joulani has no religion,” Hafid firmly stated.

The deterioration of the situation between Jabhat al-Nusra and IS in Qalamoun continues and has been taken into account several months ago. But the fact remains that Jaysh al-Islam’s entry into the conflict, its sudden announcement of its presence in Arsal and its initial confrontation with IS constituted an unexpected development. This would broaden the dangerous possibilities lying in store for Qalamoun and neighboring Arsal.