You are here: Home / Senza categoria / US arms arrive in Beirut as date is set for Saudi-French deliveries 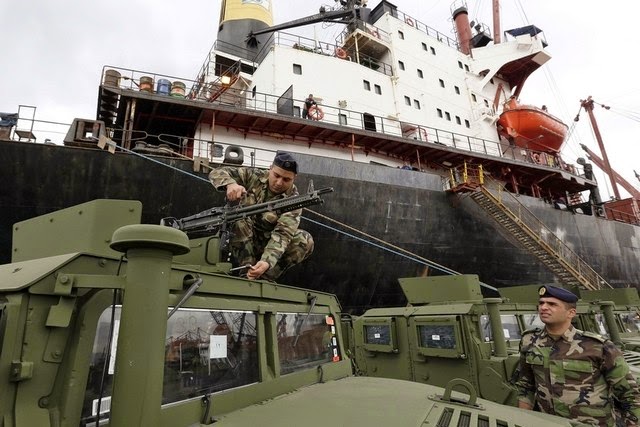 A US shipment of military equipment worth US$25 million arrived at Beirut’s port on Sunday, as it was announced that the first deliveries of Saudi-funded French weapons to Lebanon would begin in April.

Both are aimed at bolstering the Lebanese army’s fight against extremist forces on the border with Syria.
The US shipment included howitzers, Humvees and 26 million rounds of ammunition. It comes in addition to more than $100m (Dh367m) in military aid that Lebanon received from the United States last year.

A time frame for the French weapons delivery was confirmed by France’s foreign minister Laurent Fabius in a meeting with Lebanese prime minister Tammam Salam at the global security conference in Munich on Sunday.

The military aid, which will allow the Lebanese army to modernise, will be supplied over the next three years.
The announcement will come as welcome news to Lebanon, which has been facing growing daily battles with ISIL and Jabhat Al Nusra on the country’s eastern frontier.

Military experts previously expressed fears that the army’s fight against the militants was being hampered by the delay in military aid arriving, and had called for the speedier delivery of arms.

The US stepped up its shipments of military aid to Lebanon when the threat of extremists on the border became clear and the UK has helped the Lebanese army reinforce its frontier with watchtowers, materials to build defensive positions and donations of body armour and Land Rovers.

But the biggest prize so far has been the arms pledge from Saudi Arabia, which was formally signed in November last year. Last August, the Saudis also announced they were giving Lebanon’s security forces an additional $1bn grant to confront ISIL and Jabhat Al Nusra, who have launched a series of brutal attacks on the country.

On January 23, militants attacked a remote Lebanese army outpost on the border, killing eight Lebanese soldiers. Last August, Jabhat Al Nusra and ISIL captured the Sunni border town of Arsal in a joint attack before Lebanese artillery and armour wrested control of the town from the militants.

Despite news of the impending weapons deliveries from France, however, the impact of the Saudi-French arms deals may not be felt for some time.

“It’s not really a direct impact because you need time … to train the people, to incorporate it into the system,” said Elias Hanna, a retired Lebanese army general. “If they start today they need more than six months for good results.”

Of the additional $1bn grant announced in August, more than $500m is earmarked for the Lebanese army, according to Aram Nerguizian, a senior fellow at the Washington-based Centre for Strategic and International Studies. Mr Nerguizian said this would probably be spent on US weapons, including advanced systems that Lebanon has never had before.

“If you didn’t have the Syrian civil war and the threat from [ISIL] and Nusra … you wouldn’t have this degree of willingness to entertain the kinds of transfers that might take place” within the coming months and years, he said.

But considering the scale of the threat, the pace of delivery has been slow.

While the US has increased its arms transfers to Lebanon, some say the army has so far received relatively little. “I wouldn’t say peanuts, but not sophisticated or heavy weapons”, said Hisham Jaber, a retired Lebanese general, who also served as the country’s defence attaché to France. He said Western nations’ long-standing hesitancy to give Lebanon sophisticated weapons was driven by a desire to appease Israel.

“We need everything: we need tanks, we need artillery, we need helicopters, we need hospitals,” he said.

Before France’s announcement on Sunday, Gen Jaber had said that Beirut should entertain previous Iranian offers to arm the military. In supporting the Assad regime in Syria and government-aligned Shiite militias in Iraq, Tehran has shown its ability to flood conflict zones with arms quickly and effectively.

Hizbollah politicians had also decried how long the Saudi-French arms transfer has taken and encouraged Lebanon to seek arms from Iran.

But Gen Hanna said that the kinds of arms that could be immediately furnished by Iran would not necessarily be of the type required by the Lebanese Army in its fight against the militants.

“We don’t need heavy arms to defeat [ISIL] … we need drones, night-vision goggles, information [gathering technology], choppers – they don’t have it in Iran,” he said.

And so far, the violence on the border has been light compared to the bloodshed across in Syria. The Lebanese army, while suffering some losses, has proven capable of holding its ground.

Mr Nerguizian said he was confident that the army could hold its line on the eastern front, citing the recent acquisitions of US-made Hellfire missiles and large ammunition transfers by Washington.

But Gen Jaber believes cracks could begin to show if the impact of military aid in Lebanon is not felt soon.
“[ISIL] and Al Nusra will make a breakthrough somewhere.” he said. “They cannot stay where they are. They did not come to Lebanon for tourism.”