You are here: Home / Africa / 3,000 Ethiopian troops enter Somalia for attack on al-Shabab 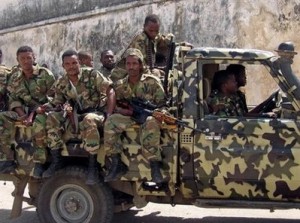 At least 3,000 Ethiopian troops have entered Somalia, reportedly for an attack on al-Shabab militants.

Residents of the southwestern Gedo region said troops with tanks and armored vehicles began crossing the border Monday and have been seen in the town of Luq.

Earlier, authorities in the region told VOA that forces are being mobilized for an offensive in areas still controlled by al-Shabab, including the group’s last major stronghold, the town of Bardere.

The Islamist militants have lost most of the territory they once controlled in Somalia but still carry out large-scale attacks. On Tuesday, an al-Shabab raid on homes in northeastern Kenya killed 14 people.

Ethiopian forces invaded Somalia in 2006 to oust an Islamic government and since then, Ethiopia has frequently sent troops across the border.

The Ethiopians often work in tandem with the African Union mission in Somalia, AMISOM, which played a major role in driving al-Shabab out of the capital, Mogadishu, and other areas.