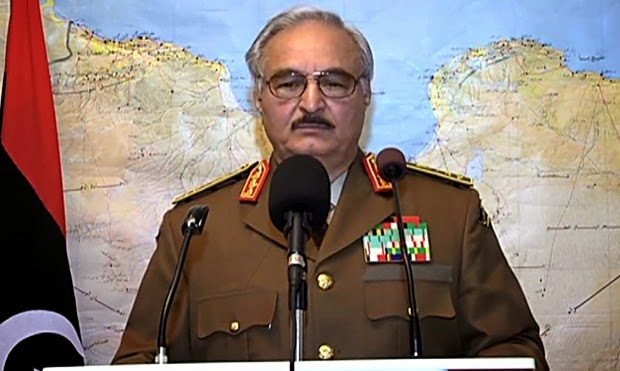 General Khalifa Hafter has been appointed as Commander General of the Libyan National Army (LNA) by House of Representatives (HoR) President Ageela Saleh Gwaider. He has also been promoted to Lieutenant General.

Its Libya Herald’s understanding that the appointment of Hafter has been made unilaterally by HoR President Ageela Saleh Gwaider within what he sees as his powers as Supreme Commander of the Libyan National Army.

However, there is opposition to Hafter’s appointment within the HoR and a rejection of Saleh’s interpretation of his powers enabling him to appoint Hafter.

In February, the Deputy of the HoR Defence and National Security Committee, Mosab Al-Abed, told Libya Herald that the HoR was not going to appoint Hafter as General Commander of the LNA.

Abed felt that Saleh could only make the decision in tandem with his two deputies and that the HoR’s president and deputies power as Supreme Military Commanders had lapsed. Abed was concerned about the loss of civilian oversight over the army.

On another level, whilst Hafter is a very divisive figure in Libyan society in general, he is particularly opposed by the GNC-Libya Dawn coalition who have referred to him as a ‘’war criminal’’.

His appointment could add to the polarisation of Libyan politics and could hinder UN-led efforts to resume the Libyan political dialogue.