You are here: Home / MidEastGulf / 30 soldiers killed in mutiny at Yemen army base 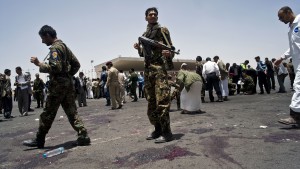 At least 30 Yemeni soldiers were killed in coalition air raids and clashes after troops attempted to defect to Iran-backed rebel ranks near the border with Saudi Arabia, a military source said Wednesday.

The incident took place at the 23rd Mechanised Brigade, stationed near the border with Saudi Arabia and left “at least 30 soldiers killed and dozens wounded” on both sides, he told AFP.

“Armored vehicles and troop carriers were destroyed or damaged” in the air raids and clashes between rival units before the situation was brought under control, the source added.

Troops loyal to former president Ali Abdullah Saleh have joined forces with the Houthi rebels, who seized the capital almost unresisted in September before advancing southwards in the impoverished Gulf country.

Saudi Arabia fears the Houthis are trying to bring Yemen under the influence of Shiite Iran.

Military sources said that the rebels fired rockets at a residential district killing eight civilians, among them three children.

AFP could not confirm the toll from medical sources.

Meanwhile, the rebel-controlled sabanews.net website reported that around 40 inmates escaped in a jailbreak after coalition jets bombed the area surrounding a prison in Mahawit province, northwest of the capital.

The U.N. says more than 3,200 people have been killed and 1.26 million displaced in Yemen since fighting broke out in March.