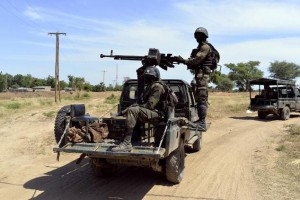 At least 30 people were killed in two suicide bombings in northern Cameroon, the latest violence to hit the area since dozens died in attacks in July.
The blasts also left 143 wounded when a bomb went off near an army camp, where soldiers are battling Boko Haram fighters from Nigeria, army and police sources said.
The attacks were launched three days after Boko Haram gunmen on horseback killed dozens of people in a village across the border in northeast Nigeria’s Borno state.
The fresh violence comes even as Nigerian President Muhammadu Buhari, who marks 100 days in office on Saturday, has intensified the battle against the group.
The Nigerian Army said Thursday it had reinstated about 3,000 soldiers who were dismissed for alleged indiscipline in the battle against the insurgents. Attacks by Boko Haram have killed at least 15,000 people and displaced 1.5 million since 2009.
Military and police sources in Cameroon said the first suicide bombing took place shortly before noon in the marketplace of Kerawa, a city on the border with Nigeria.
It was followed by a second attack about 200 meters from a military camp, said a police officer who asked not to be identified.
At least 30 people were killed, the sources said. Some 50 people were killed in July in the same region in five suicide attacks blamed on Boko Haram.
Cameroon is part of a five-nation coalition fighting Boko Haram with Nigeria, Chad, Niger and Benin. Cameroon’s far north region bordering Nigeria and Chad for the past two years has seen frequent Boko Haram raids, kidnappings and, more recently, suicide attacks.
Witnesses in the village of Fatawe in Nigeria’s Borno state told AFP that Boko Haram militants on Monday rounded up residents, tying their hands behind their backs then slitting their throats.
“They killed several dozens but I can’t give a precise number because we have yet to go back and take a headcount of the dead,” said Amodu Kadir, a village resident who fled to Mubi village in neighboring Adamawa state.
Kadir, whose father was among the victims, said the “macabre sight sent the terrified crowd fleeing in all directions in a frenzied effort to escape.
“But the attackers pursued us on their horses, shooting and trampling to death their victims,” he said.
Galadima Bubba, another resident who fled to the town of Michika, gave a similar account.
He said the village had ignored advice by Nigerian troops to relocate to Gwoza, eight kilometers away, after troops retook the town from Boko Haram forces in March.
Boko Haram militants had seized Gwoza in July last year and made it into the headquarters of their so-called Caliphate.
Nigerian troops based in the northeast have at times defied orders to battle Boko Haram, citing a lack of adequate weapons and other essential equipment.
Nigerian army spokesman Col. Sani Usman told reporters in Abuja that the cases of 5,000 soldiers who were dismissed for indiscipline were reviewed, out of which 3,032 soldiers were pardoned and recalled.
“The reinstated soldiers have shown their total readiness to be re-launched into the theatre to combat insurgency and have now commenced retraining exercise,” he said.
Usman said the army authorities had upheld the sentences of those “with criminal cases,” without explaining the nature of the crimes.
He said a judicial process would however determine the fate of 66 soldiers sentenced to death for mutiny and abandoning the war front.