You are here: Home / MidEastGulf / 30 ISIS elements killed in aerial bombardment in Sharqat 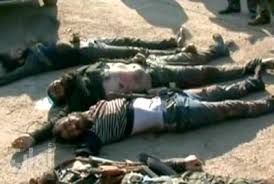 On Thursday, a security source in Salahuddin Province announced, that 30 ISIS elements including Arabs and foreigners were killed in an aerial bombardment on their hideout in Sharqat District north of Tikrit (170 km north of Baghdad).

The source said in a statement followed by IraqiNews.com, “The Iraqi Air Force has shelled, at noon today, a hideout for the ISIS organization inside the building of Sharqat Courthouse (120 km north of Tikrit), killing 30 elements of the organization including Arabs and foreigners and destructing the entire building.”

The source added, “The bombardment was carried out based on accurate intelligence information on the presence of some ISIS leaders inside the court’s headquarters.