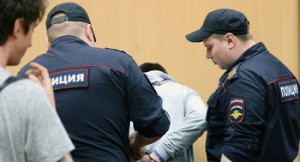 More than 30 people have been detained in a suburb of the Russian capital on suspicion of recruiting for the Islamic State in Iraq and the Levant (ISIL) terrorist group, social media reports suggested.

Russian Interior Ministry officials have confirmed to Russia Today (RT) that they made arrests in Balashikha, about 20 kilometers east of Moscow. However, they didn’t comment further on the issue.

The arrests took place in a mosque on Pervomayskaya Street, where ISIL affiliates were allegedly distributing extremist materials and hiring recruits, according to a post on the town’s community Facebook page, according to a report by RT on Friday.

A mosque employee told RT, however, that security officials only checked the worshipers’ documents, and everyone has been released.

Russian intelligence services have recently recorded a rise in the number of Russian citizens recruited by the ISIL terrorists, who are rampaging through parts of Syria and Iraq.

According to different estimates, there are currently from two to five thousand Russians fighting for the terrorists, head of the Anti-terrorist Center of the Commonwealth of Independent States (CIS), Andrey Novikov, told Interfax last month.

There have been incidents of ISIL attempts to recruit Russian students, among which is the case of Lomonosov Moscow State University philosophy student Varvara Karaulova. She was caught trying to cross the Turkey-Syria border to join the terror group, along with 13 other Russian citizens in June.

According to the International Centre for the Study of Radicalization, 20,000 foreign nationals from about 100 countries around the world were estimated to be fighting for various militant groups, including ISIL as of January. Nearly a fifth came from Western Europe, with the UK and Germany topping the list, it added. Other countries, whose influx exceeds 1,000 people, include Jordan, Morocco, Saudi Arabia and Tunisia.