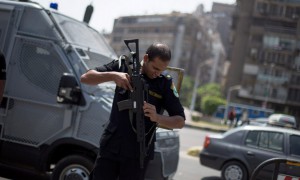 At least three policemen and three Islamists were killed on Saturday during armed attacks and confrontations in North Sinai province bordering Israel and the seaside province of Damietta.

A traffic police officer was shot dead outside a preparatory school and another was shot dead in the head by unknown militants in North Sinai’s Arish city, security sources and medics told Xinhua.

The Egyptian Interior Ministry clarified that the second is a retired policeman who was shot in the head after exchanging fire with the militants, noting the perpetrators drove a private vehicle and launched the two attacks separately.

On the other hand, the Interior Ministry said that a policeman and three loyalists of the currently-outlawed Muslim Brotherhood group in a fire exchange during a security raid at a town in the coastal city of Damietta.

The forces arrested 18 others and found with them a few guns and large amounts of Molotov cocktails, according to the ministry.

Terrorist activities mounted in Egypt after the removal of former Islamist President Mohamed Morsi by the military in July 2013, after mass protests against his one-year reign.

A massive security crackdown on pro-Morsi sit-ins in mid-August 2013 left about 1,000 killed and thousands more arrested.

Since then, militant anti-government attacks against the police and the military have been growing in the restive Sinai Peninsula and extended to reach the capital Cairo and various provinces nationwide, leaving hundreds of security men killed over the past couple of years.

In late 2014, the Brotherhood group, from which Morsi hailed, was designated by the new leadership as “a terrorist organization” after a series of blasts targeted security premises and personnel, although the group denied connection to them.

Sinai-based, al-Qaeda-inspired Ansar Bayt al-Maqdis militant group, which has sworn allegiance to the Islamic State (IS) regional militant group, claimed responsibility for most of the anti-government attacks in Egypt.