You are here: Home / Africa / 3 killed in Islamist bus attack in Kenya 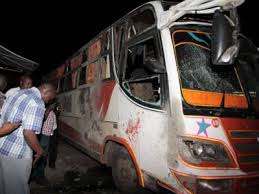 Confirming the attack, a senior police officer from Lamu County who spoke to Anadolu Agency on condition of anonymity due to restrictions on speaking to the media, said the attackers who were hiding in a dense forest area had shot at the passenger bus despite their presence but police managed to repel the attackers

“There were some who were injured and rushed to Witu Hospital,” he said, adding that police have offered escorts in areas close to the Somali border since 28 teachers on a bus to Nairobi had been killed killed.

Pictures of the bus belonging to the Kipini Raha company riddled with bullet holes circulated on social media platforms in Kenya, with many calling for the government to ensure Kenyans are more secure during the election period.

In a statement via their radio station in Somalia, the militants had promised to carry out attacks in Kenya during the campaign period.

Kenyans are scheduled to vote in legislative and presidential elections on Aug. 8.