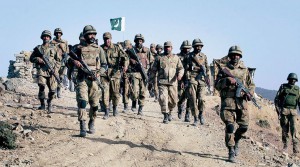 A suicide bomber on Tuesday killed at least three people and wounded dozens in Pakistan’s volatile northwest where security forces are fighting the Taliban and their allies, officials said.

The attack targeted a paramilitary vehicle in the Jamrud area of the Khyber tribal agency, official Shaukatullah Afridi, who was metres away from the blast, said.

The vehicle belonged to the Khasadar, or tribal police force. At least 43 wounded were rushed to hospital in Peshawar, about 20 km (12 miles) to the east, hospital doctor Noor Wazir said, adding the death toll could rise.

The military has been battling the Pakistani Taliban and their ally, the Lashkar-e-Islam, in Khyber since October last year, with fighting mostly focused on the strategic Tirah Valley.

Hundreds of militants have been killed in ground operations and air strikes, according to the military. Several soldiers have also been killed. Agencies are unable to independently verify the figures, as access to the area has been strictly controlled.

Hundreds of Taliban militants are said to have taken refuge in Khyber after fleeing a military operation in their headquarters of North Waziristan that began in June last year.

The Pakistani Taliban – separate from but allied to the Afghan Taliban – have since 2007 been battling to overthrow Pakistan’s government and impose a strict interpretation of Islamic Sharia law.

At their height, the insurgents controlled swathes of territory in the tribal areas, as well as the Swat Valley, but have been beaten back by repeated military operations since 2009.

The Taliban now operate in smaller pockets in the tribal areas near the Afghan border, from where it continues to launch bombings and other attacks on Pakistani forces and civilian targets.