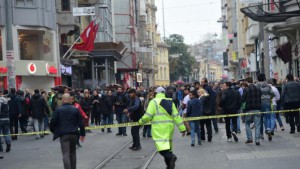 Three Israelis were among the five people killed in a suicide bombing at a main shopping center in Istanbul, Turkish officials said.

At least 11 Israelis were among the 36 people who were wounded in the blast Saturday.

Turkish Deputy Health Minister Ahmet Baha Ogutken confirmed in a statement to the Daily Sabah newspaper that an Israeli woman was killed in the explosion. Eli Bin, head of Israel’s Magen David Adom rescue services, also confirmed to Israel’s Channel 2 that “there is one Israeli killed whose family has been notified.”

The Israeli victims were part of a 14-member tour group, according to the Israeli Foreign Ministry.

The ministry feared two or three Israelis were among the dead, but declined to confirm reports of Israelis killed in the attack, according to The Times of Israel.

“We fear for the lives of three Israelis who were hurt in the attack,” ministry spokesman Emmanuel Nahshon said on Saturday afternoon.

Two Israelis injured in the blast were seriously hurt. One was undergoing surgery in an Istanbul hospital, Channel 2 reported.

The explosion rocked Istiklal Avenue in the heart of the Turkish city, a wide pedestrian boulevard with a historic tram running down the middle and lined with international stores and foreign consulates. Police sealed off the street after the attack and ambulances carried the injured away.

Turkish media identified the suicide bomber as Savaz Yildiz, 33, from the Turkish city of Adana, saying he was known to Turkish authorities.

There was no immediate claim of responsibility for the bombing. But Turkish officials pointed to the Kurdistan Workers Party, or PKK, fighting for Kurdish autonomy in the southeast, or to Islamic State.

A CCTV camera appears to have captured the blast, and the footage was posted online by the private Dogan news agency.

A wounded Israeli, Naami Peled, spoke to Hebrew-language media from the hospital after the attack. Israeli tour guide David Cailfa, who was apparently leading the group of 14 Israelis around Turkey, confirmed on social media that he had also been hurt.

“To all those dear people who are worried, I am sorry that I cannot answer you,” Califa wrote in Hebrew on Facebook. “Naama and I are lightly wounded and being treated. The rest of the group members are dispersed among four hospitals. Please pray with us for their well being.”

The Foreign Ministry said it has yet to make contact with six Israelis thought to have been at the site of the attack.

Ministry Director-General Dore Gold, who is in the United States for the annual AIPAC conference, will leave early to travel to Istanbul on Sunday afternoon in coordination with the Turkish government.

Prime Minister Benjamin Netanyahu instructed the Foreign Ministry to ask Turkey to condemn a tweet by a senior official in its ruling party, who reportedly expressed hope that the Israelis hurt in the attack would die.

The explosion comes after two recent suicide bombings in the capital, Ankara, which killed a total of 66 people. Thirty-seven people were killed and 125 wounded Sunday in a suicide car bombing in Ankara. On Feb. 17, a car bomb attack in central Ankara killed 29 people. PKK militants claimed responsibility for both attacks.

And Islamic State was blamed for a suicide bombing in Istanbul in January that killed 12 German tourists.