You are here: Home / Mediterranean / 3 islamist militants, one soldier killed in Tunisia clashes 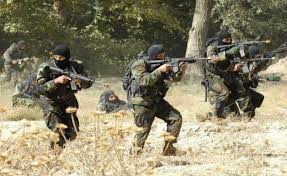 At least three Islamist militants and a Tunisian soldier were killed on Sunday in clashes in the central Kasserine province, near the Algerian border, a security source said.

Islamic State militants have claimed two major attacks on foreign tourists this year in Tunisia, and the army is fighting a low-level conflict against pockets of other militants in rural areas near the frontier with Algeria.

Sunday’s clashes came two days after Islamist militants beheaded a Tunisian teenager in the central province of Sidi Bouzid and sent his head to his family after accusing him of spying for the military.

“At least three terrorists and one soldier were killed in violent clashes at Mguila Mountain, in a counter-strike operation after terrorists beheaded the 16-year-old,” the source said.

But more than 3,000 Tunisians have left to fight for Islamist militant groups in Syria, Iraq and neighboring Libya. Some of those jihadists have threatened to return home and carry out attacks on Tunisian soil.

In March, Islamist gunmen killed 21 tourists in an attack at the Bardo Museum in Tunis, and 38 foreigners were killed by another gunman in an assault on a Sousse beach hotel in June.

Officials said the attackers had been trained in jihadist camps over the border in Libya, where chaos has allowed Islamist militants to grow in strength. The U.S. military said it believed it had killed a major Islamic State commander in an air strike on the Libyan city of Derna last week.