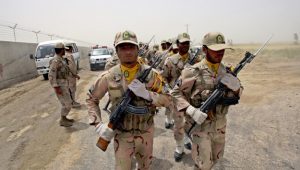 Three members of the Iranian security forces were killed overnight in clashes along the country’s border with Pakistan, state news agency IRNA reported.

It said that three members of a “terrorist group from Pakistan” were also killed in the clash.

The unrest erupted when the group attacked a police post in the border area of Mirjaveh, around 75 kilometers southeast of Zahedan, the capital of Sistan-Baluchistan province, IRNA said.

Three of the attackers were killed along with a police officer and two members of the Revolutionary Guards, it added.

The Guards confirmed that a police officer was killed in an ambush in Mirjaveh and two soldiers died when their vehicle was hit by an improvised explosive device (IED).

Iran has criticized Pakistan in the past for supporting the Jaish al-Adl extremist group, which it accuses of ties to Al-Qaeda and carrying out numerous attacks in Sistan-Baluchistan.

The province in southeastern Iran has long been plagued by unrest from both drug smuggling gangs and separatist militants.

In April 2017, ten Iranian border guards were killed by militants in Mirjaveh.

Extremist groups, which have carried out several deadly attacks in recent years, say they are fighting against discrimination.