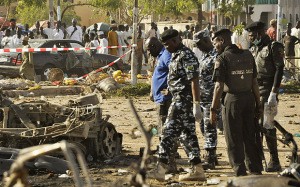 The Borno State Police Command has said that three female suicide bombers died in Borno when the explosives strapped to their bodies detonated, adding that no one else was killed.

The state police commissioner, Aderemi Opadokun, told AFP News Agency that the bombers died on Tuesday on their way to the state capital, Maiduguri which has been hit multiple times by Boko Haram suicide attacks.

“All three suicide bombers were killed and there were no other casualties,” he said.

It is unclear whether Boko Haram was behind the attempted attack but the militant group has previously used female suicide bombers and homemade explosives in its bloody six-year insurgency.

News of the deaths came as Nigeria’s new President Muhammadu Buhari, who has made stopping the group’s insurgency a top priority, prepares to meet his regional counterparts on the issue.

Heads of state from Niger, Chad, Cameroon and Benin are due in Abuja today to discuss plans for an enhanced multinational force to take on the militants.

Since Buhari took office on May 29, Boko Haram attacks have gathered pace in the Northeast with a total of 109 people reportedly killed.