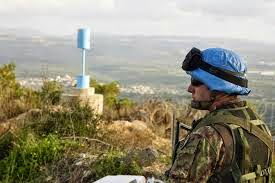 The situation along the Lebanon-Israel border is “under control” after the recent tit-for-tat attacks between Hezbollah and Israel, UN spokesman Andrea Tenenti said Monday.

“The situation at the border is stable and under control,” Tenenti told local daily As-Safir.

He said UN peacekeepers were exerting “maximum efforts” along the Lebanese-Israeli border.

“UNIFIL troops have bolstered their presence on the ground and stepped up patrols in all areas of operation in cooperation with the Lebanese Army,” he said.

“At the moment, the situation along the Blue Line is quiet.”

Two Israeli soldiers were killed in the latest flare-up of violence between Hezbollah and Israel in the occupied Shebaa Farms on Lebanon’s southeastern border on Jan. 28.

The Hezbollah attack was to avenge the killing of six party members in a Jan. 18 Israeli airstrike on a Hezbollah convoy in Syria’s Golan Heights town of Qunaitra.

A Spanish peacekeeper was also killed in Israeli shelling in the exchange of fire following Hezbollah’s attack.