You are here: Home / Africa / 28,000 people evacuated from Yemen to Somalia 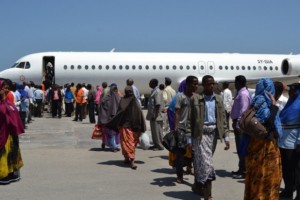 More than 28,000 Somalis and Yemenis fleeing warfare in Yemen have been evacuated to Somalia’s northeastern region of Puntland since late March, the United Nations refugee agency (UNHCR) said Tuesday.

A boat carrying over 2,500 people, including some 2,100 Somalis and 330 Yemenis, arrived in Bossaso port, Puntland on July 30 — the latet transport, the UNHCR said.

Their journey from Yemen’s port town of Mukalla to Bossaso took a couple of days due to bad weather in the Red Sea, it added.

Since the overthrow of Somalia’s Siad Barre government in 1991, masses of Somalis have crossed the sea to seek refuge in Yemen.

The Somali government and UNHCR are working together to evacuate Somali refugees in Yemen where fighting between competing forces has lasted for months.

The UNHCR, supported by its partners, is also providing onward transportation for the Somalis returning home to areas of their origin or return.

“Almost 7,000 Somalis have returned to South Central regions, some joining settlements for internally displaced people there,” it said.

“More help is needed to ensure basic services and livelihood and strengthen registration, verification and reception capacity at the main ports, particularly as outflows of Somali nationals are expected to continue,” it added.

The UN-led Somalia Response Plan for the Yemen Crisis was launched in June but remains “seriously underfunded”, as only five percent of the 64 million U.S. dollars needed has been offered by donors, according to the UNHCR.

There are an estimated 236,000 Somali refugees in Yemen.