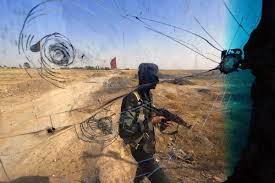 Turkmenistan is guarding its border with Afghanistan and is prepared to ward off any attempt by Islamic State militants who can be seen massing on the other side of the border.

Last month, the media reported IS forces were moving north from southern Afghanistan. Today they can be seen in the Almar district in the province of Faryab, according to Radio Free Europe/Radio Liberty’s Turkmen service.

“Natives of Uzbekistan and Turkmenistan have been observed among them,” Afghan Senator Gulmuhammad Rasuli, who represents Faryab Province, said.

IS won’t dare “infiltrate Turkmenistan,” according to Turkmen army Lt. Col. Soltan N. “They might be strong… in their own mountains, but on the Turkmen plains, they’d be defeated.”

Meanwhile, Turkmen military officers and government officials are keeping a very close watch on the IS militants in northern Afghanistan. They have made the following observation: IS lacks order and a unified command. According to Soltan N., the Taliban and IS are behaving more like rivals than allies.

“The ethnic Turkmens along the Afghan frontier reject the Islamists who have appeared there,” he said.

“Turkmen tribal elders [in Afghanistan] dissuade their youth from joining the Islamists, explaining that [Turkmenistan] is their historic motherland.”

In the hope that diplomacy can win over militancy, Turkmen has discussed several joint infrastructure projects during talks with Afghanistan.

Last month. Turkmenistan agreed to construct a maternity hospital and a children’s home.