You are here: Home / Africa / 275 women and children saved from Boko Haram now in military custody 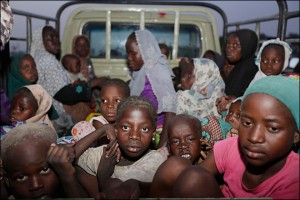 All 275 women, girls and children rescued from Boko Haram and taken to the safety of a northeast Nigerian refugee camp have been taken into military custody amid suspicions that some are aiding the Islamic extremists, a camp official and a Nigerian military intelligence officer said Wednesday.

They said soldiers on Tuesday took the group from Malkohi Camp to the airport at Yola city, where a military plane flew them to an unknown destination.

Spokesman Sani Datti of the National Emergency Management Agency, which manages the camp, said he was aware that soldiers removed the group but said he had no other information about an “entirely military affair.”

The army spokesman for 23rd Armoured Brigade in Yola could not be immediately reached for comment.

An intelligence officer told The Associated Press the move followed fears that some women were communicating at night with Boko Haram. The camp official said the suspicions were voiced during trauma counseling sessions. Both requested anonymity because the affair is sensitive.

The group – which includes 67 women and girls and the rest young children – was brought to Malkohi on May 2.

They told The Associated Press heartrending stories of their captivity and the trauma of their rescue from a Sambisa Forest camp, where Boko Haram fighters stoned several of them to death. Others were crushed accidentally by a military armored car and three women died when a land mine exploded. All the rescued children were badly malnourished.

One young woman, Binta Ibrahim, told how at 16 she rescued three children aged between 2 and 4, cared for them during a year of captivity under Boko Haram and brought them to the safety of the refugee camp.

Ibrahim’s humanity so moved U.S. U.N. Ambassador Samantha Power that she called her an inspiration at the commencement address for the University of Pennsylvania this week.

“Binta is a Muslim. The three kids she saved are Christian. Tell me a more powerful rejection of Boko Haram’s perversion of Islam than Binta’s love for those kids,” she said.