You are here: Home / Senza categoria / US and UK close embassies in Yemen after armored diplomatic car survives being hit by 87 bullets and rebel group takes over large parts of country on the brink of civil war 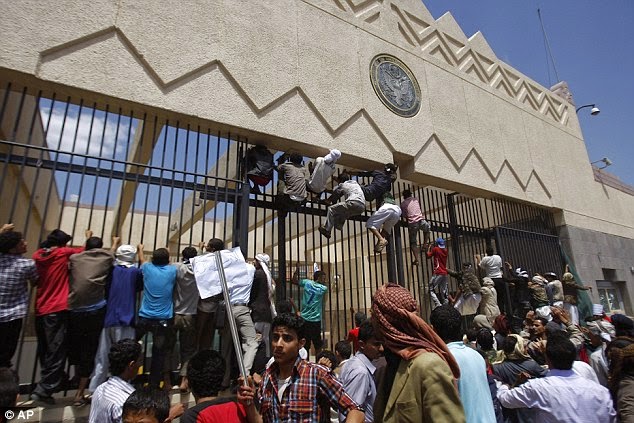 The United States and UK have closed their embassies in Yemen as Shiite rebels have taken control of much of the country on the brink of civil war.
‘Due to uncertain security situation in Yemen, we have suspended our embassy operations; embassy staff have been relocated out of Sana’a,’ the State Department said.
The closure follows months of unrest in the country and the southwestern end of the Arabian Peninsula, including the collapse of its US-backed government.
Staff at the embassy, which was already working with a bare bones crew, will leave the capital by Wednesday evening.
Shiite Houthi rebels, linked to Iran, have bombarded and now taken control of the majority-Sunni nation’s capital Sana’a.
‘The security situation in Yemen has continued to deteriorate over recent days,’ UK Minister for the Middle East Tobias Ellwood said.
The State Department urged all US citizens to leave Yemen, and said anyone planning on traveling to the Middle Eastern country should wait.
The embassy told US citizens that ‘All consular services, routine and/or emergency, have been suspended until further notice’.
A British statement on the closure said the move was ‘a temporary suspension of operations’.
An American diplomatic car in the country was shot by 87 automatic rounds on Jan 19, according to the New York Times.
Armor on the car was able to withstand the assault and two diplomats inside were able to reach safety.
The US is expected to ask either Turkey or Algeria to look after its interests in Yemen while the embassy is closed.
British citizens can ask for consular assistance at any European Union member state embassy.
American officials said that counter-terrorism operations in the area would continue.
Last month President Barack Obama said that ‘Yemen has never been a perfect democracy or an island of stability’ but that the US was able to combat terrorist organizations ‘by partnering and intelligence-sharing with that local government’.
The government of Yemeni president Abed Rabbo Mansour Hadi resigned in late January after losing control of the military and intelligence services.
He remains under house arrest.
The Houthi rebels dissolved parliament last week and Mohammed Ali al-Houthi was appointed as president, according to Al Jazeera.
Mr Al-Houthi’s cousin Abdel-Malik al-Houthi is the leader of the insurgents and gave a televised speech to the country on Tuesday.
They also announced a transitional council to act as an interim government.
Rival political factions have begun UN-brokered talks after the fall of Western-backed leaders, though two parties backed out this week because of alleged Houthi threats.
Observers say the breakdown of talks could lead to civil war.
Saleh Ali al-Sammad, a senior Houthi figure in Sana’a, said that his party wanted normal relations with the United States and other countries.
They oppose al-Qaeda but are also suspicious of widespread US drone activity in Yemen.
The country had been a key operating area for CIA agents and dozens of drone strikes over the past several years.
The CIA and the military’s Joint Special Operations Command conducted reportedly conducted 23 drone strikes in country in 2014, with the intelligence service leading the majority.
The American Embassy in Yemen was the site of a terrorist attack in 2008, when 19 people including ten Yemeni guards and civilians were killed along with six al-Qaeda militants.
Non-essential staff at the embassy were sent out of the country in September.
Tuesday’s shuttering of the embassy is the third such closure for the US since the Arab Spring in 2010, following the end of operations in Damascus, Syria and Tripoli, Libya.