You are here: Home / West Asia / 27 killed and 20 injured in Taliban-Islamic State clashes in western Afghanistan 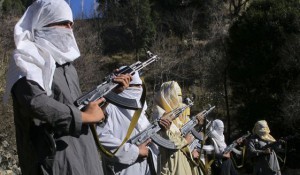 According to Afghan media outlets, ongoing clashes between Taliban and militants loyal to the so-called Islamic State (IS) or Dayesh in western Afghanistan have left at least 27 insurgents dead and 20 other people injured.

Afghan military spokesman Mohammad Hanif Rezaey reportedly specified that 15 IS militants and 12 from the Taliban were killed in fighting on Sunday afternoon in three areas within Farah province’s Khak-e-Safid district.

Among the injured were 13 IS members and seven from Taliban ranks.

Afghan TV channel Tolo reports that clash between Taliban and Dayesh outfits which flared up in Khak-e-Safid district of Farah province Sunday evening have so far claimed the lives of 15 Dayesh insurgents and 12 Taliban fighters.  ,” Tolo reported in its news bulletin.

Xinhua reports it is the second time that fighting between Taliban and Dayesh, the two anti-government extremist groups has been reported in Afghanistan.

The previous clash, according to media reports, had taken place in Chaparhar district of the eastern Nangarhar province couple of weeks ago.