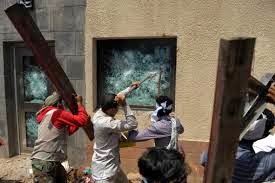 Houthi rebels took all U.S. Embassy vehicles parked at the Yemeni capital’s airport and wouldn’t allow departing U.S. Marines to take their weapons with them, a top airport official in Sanaa said Wednesday.

The actions come after the United States, along with Britain, suspended operations at their respective embassies and moved out staffers because of the instability in the Arab nation.

According to the official, the Houthis seized many U.S. Marines’ weapons at the airport and the American troops also handed over some to random airport officials.

Yemeni employees at the American Embassy in Sanaa also said that embassy officials burned tens of thousands of documents Tuesday night and destroyed weapons that were inside the embassy’s storage warehouses.