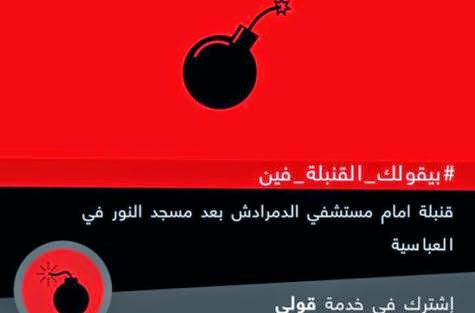 An upsurge of roadside bombs in Egypt has given rise to a smartphone app warning against explosives threats and related traffic snarl-ups in a country notorious for legendary road chaos.

“Where is the Bomb?” is a popular feature of Bey2ollak (it will tell you), a traffic notification app launched by five young Egyptians in 2010 to guide the nation’s motorists on the status of the roads.
“With explosions becoming part of our life and increasing our traffic problems, we thought of starting the hashtag ‘Bey2ollak Where is the Bomb?’”, Jamal Sadeq, a co-founder of the service, said.
“Usually when a bomb is detected or explodes, this results in crowding that leads to traffic congestion. Through this hashtag, we send an instant alert to drivers about the locations of these bomb threats and advise them to avoid these places.”

The service, relying on volunteers in the streets, has so far covered the Greater Cairo zone and Alexandria, Egypt’s second city. Operators hope it will expand to cover this nation of nearly 90 million people.
In recent months, Egypt has experienced a rash of bombs planted on trains and near civil facilities such as shopping malls, schools and hospitals. In most cases, the explosives are mostly flash-bang bombs apparently aimed at causing panic among the public rather than major casualties.
However, deadly attacks have targeted mainly security forces since mid-2013 when the military toppled president Mohammad Mursi of the Muslim Brotherhood following enormous street protests against his one-year rule.
Authorities have blamed the assaults on the Brotherhood, which has denounced Mursi’s removal as a coup and vowed to reinstate him.
The now-banned Brotherhood has repeatedly denied any link to violence, claiming peaceful activism.
When they started “Bey2ollak” five years ago, the founders hoped they would attract around 1,000 users.“We were surprised when the figure quickly increased to reach more than one million now,” Sadeq told private CBC TV this week.
“Bey2ollak” is a word in colloquial Egyptian commonly used to start imparting information.
‘Impressed’
Like the original traffic service, the hashtag “Bey2ollak Where is the Bomb?” has gained popularity among mobile and social networking users since its launch last month.
“I am impressed that Bey2ollak has developed its service to cope with the security situation,” an Egyptian subscriber called Samar, said in a tweet.
Another said sarcastically: “The terrorists must now cooperate and provide an update about the places of where they plant bombs!”
In the past few days, the app has alerted users about bomb scares and blasts in Cairo and Alexandria.
Pro-government media says the uptick in explosions are aimed at derailing Egypt’s plans for holding a major investment conference and parliamentary elections next month.Source:  gulfnews