You are here: Home / MidEastGulf / 26 ISIS elements killed in rocket attack in Fallujah 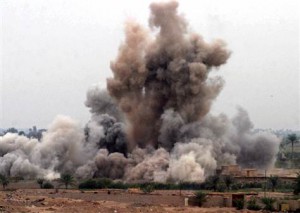 The Ministry of Defense announced on Wednesday, that 26 ISIS components, including Arabs and foreigners, have been killed in a rocket attack in the district of Fallujah.

The Ministry of Defense said in a statement received by IraqiNews.com, “Military intelligence carried out missile strikes to ISIS hideouts in Fallujah.”

“The bombing resulted in killing 26 ISIS elements, including Arabs and foreigners, in addition to the destruction of a large arms depot and two vehicles,” the Ministry added.