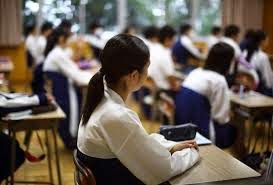 The government is preparing special lessons on the Islamic State of Iraq and Syria (ISIS) for elementary, middle and high school students to prevent Korean teenagers joining it.

The program is part of measures to strengthen the protection of Koreans abroad, officials said Thursday.

This comes after a Korean teenager, surnamed Kim, crossed the border from Turkey to Syria to join ISIS last month. He allegedly obtained information about the group through the Internet and contacted people there online and via mobile devices.

“Elementary, middle and high school students will learn the truth about ISIS,” a Ministry of Education official said.

“We are introducing the lessons because ISIS uses social networking services (SNS) to conduct propaganda activities and attract people to join it. Kim’s case showed that Koreans are no longer safe from the ISIS activities.”

The special classes were approved at a meeting of the foreign affairs, public security and safety, justice, national defense, and education ministries, and the Supreme Prosecutors’ Office and National Police Agency, Wednesday.

The education official said the ministry had been developing material about ISIS and would distribute it to schools soon.

“As the ISIS issue is very sensitive, we think giving too much information may make children curious about the terrorist group and they could try to contact it, like Kim,” she said, adding the lessons would let students know how dangerous the group was.

In January, Kim, 18, was reported missing during a trip to Turkey. But it was found that Kim met an unidentified man and went to Besiriye, near the Syrian border.

The unidentified man is believed to be connected to ISIS and Kim is suspected of joining the group.

Police found that Kim used the Internet to search for words including “ISIS,” “Turkey,” “Syria” and “Islam”, and for photos related to ISIS.

He also joined a Facebook group called “Join the Islamic State,” where he asked questions about how to join.

Besides the school program, the government will strengthen monitoring of online postings about ISIS.

It also will meet Korean missionary or relief groups that are working in countries such as Turkey, Jordan and Lebanon to ensure the groups’ safety. The Ministry of Foreign Affairs has already met such groups in Seoul.

The government will also send an additional official to 10 countries where many incidents involving Koreans occur. In the Philippines, where four Koreans have been killed this year, it will send an extra police officer to the Korean Desk to liaise with local police.