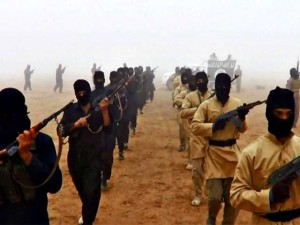 The new figure marks “a doubling of volunteers in just the past 12 months and stark evidence that an international effort to tighten borders, share intelligence and enforce antiterrorism laws is not diminishing the ranks of new militant fighters,” noted the Times.

NYT learned from intelligence and law enforcement officials that “among those who have entered or tried to enter the conflict in Iraq or Syria are more than 250 Americans, up from about 100 a year ago.”

President Obama, during his address to the United Nations General Assembly, vowed to “compromise” with Iran and Russia on combating ISIS in Syria.

American intelligence analysts are “preparing a confidential assessment that concludes that nearly 30,000 foreign fighters have traveled to Iraq and Syria from more than 100 countries since 2011,” reported the Times. “A year ago, the same officials estimated that flow to be about 15,000 combatants from 80 countries, mostly to join the Islamic State.”

News reports have surfaced accusing the Pentagon of altering ISIS intelligence reports to fit the president’s political narrative that he is winning the war against the jihadist group. A group of Republican lawmakers are demanding answers on why the intelligence assessments were changed.

President Obama is expected to chair an international summit on the sidelines of the UN General Assembly for international leaders combating ISIS and “violent extremism” as a whole.

Iran’s designation by the United States as the most active state-sponsor of terror precludes it from participating in the summit, reports The Guardian.

Nevertheless, Obama told the UN General Assembly that he is willing to work with Iran and Syria to resolve the Syrian conflict.

“Lasting stability can only take hold when the people of Syria forge an agreement to live together peacefully,” said the president. “The United States is prepared to work with any nation, including Russia and Iran, to resolve the conflict.”

“Realism dictates that compromise will be required to end the fighting and ultimately stamp out ISIL,” conceded Obama. “But realism also requires a managed transition away from [Syrian dictator Bashar] Assad into a new leader and an inclusive government that recognizes that there must be an end to this chaos so that the Syrian people can begin to rebuild.”

Agence-France Presse (AFP) reports that an assessment of the foreign fighter flows by the U.S. Congress is expected to paint an even “bleaker picture, suggesting that a year of US-led air strikes has not slowed recruitment.”

The Pentagon has set up a $500-million program to train “moderate” Syrian rebels that has proven to be an embarrassment.

U.S. Central Command (CENTCOM), the military headquarters overseeing the American bombing campaign and other efforts against ISIS, admitted that the second group of trained fighters deployed into Syria surrendered some of the U.S.-supplied weapons and vehicles to al-Qaeda’s affiliate in Syria, the al-Nusra Front, in exchange for “safe passage.”

The first group of nearly 60 U.S.-trained fighters was defeated by the al-Nusra Front.