You are here: Home / MidEastGulf / 25 Islamic State fighters killed in blast of their own explosives in Syria 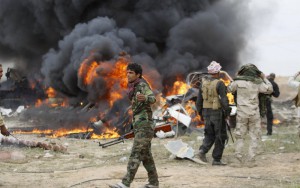 25 fighters from the militant group of Islamic State were killed after a strong blast occurred in their explosive manufacturing plant in Syria on Wednesday.

Britain-based Syrian Observatory for Human Rights (SOHR) which provides information about the ongoing war in Syria is reporting that the IS explosives factory was destroyed in the explosion.

“A strong explosion took place this evening in an IS explosives factory in the town of Al-Mayadeen in the province of Deir Ezzor,”, SOHR report states.

The report adds that “Several other explosions followed, shaking the whole town. Twenty-five ISIS fighters were killed, around 20 others were injured.”

Most parts of Deir Ezzor province in Syria are in the hands of self proclaimed Islamic State.