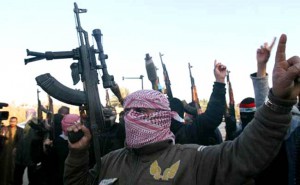 At least 25 Syrian rebels were killed overnight in an attack by Islamic State group fighters on an insurgent stronghold in Aleppo province, a monitor said today.

Fighting lasted until dawn today in Marea, one of the most significant rebel bastions in the divided province. The town sits on a road linking eastern Aleppo city and the border with Turkey.

At least eight IS fighters died, according to the Syrian Observatory for Human Rights, “including four suicide bombers who blew themselves up with explosive belts”.
, director of Shahba, an Aleppo-based activist news network, said in a Facebook post that “an IS cell infiltrated the town of Marea and its fighters bombed and fired upon civilians”.

Rebel fighters surrounded the jihadists, prompting them to blow themselves up, Khatib added.

IS jihadists on Sunday seized full control of Umm Housh, one of four villages in the northern province of Aleppo that lie along a rebel supply line from Turkey, which is a major backer of Syria’s opposition.

At least 37 rebel fighters and 10 IS jihadists died in the battle for the town, the Observatory said.

More than 240,000 people have been killed in Syria since the conflict began with anti-government demonstrations in March 2011.