You are here: Home / MidEastGulf / 25 dead after mosque bombing in Yemen capital 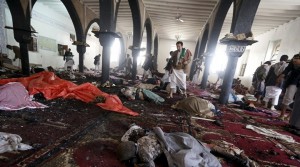 A bomb attack targeting Shiite worshippers at a mosque in Yemen’s capital has killed at least 25 people and wounded dozens more during prayers for the Muslim holiday of Eid al-Adha, according to local medics.

The blast happened in the Balili mosque where Huthi Shiite rebels who control Sanaa go to pray, according to witnesses.

Witnesses reported that after a first blast inside the mosque, a suicide bomber detonated an explosives belt at the entrance as worshippers rushed outside.

There was no immediate claim of responsibility but Sanaa has been shaken by a string of bombings by the Islamic State jihadist group in recent months targeting Shiites.

The radical Sunni Muslim group considers Shiites to be heretics and has also claimed bombings of mosques in Kuwait and Saudi Arabia.

The Iran-backed Huthi rebels have seized several regions of Yemen including Sanaa which they overran a year ago.

Pro-government forces backed by Saudi-led air strikes have recently managed to wrest back some southern provinces, including Yemen’s second city of Aden.

The so-called Islamic State group and the Yemen-based branch of its jihadist rival Al-Qaeda have exploited the turmoil to boost their activities in the impoverished country.