You are here: Home / West Asia / 24 militants killed in US drone strikes in NW, Pak-Afghan border 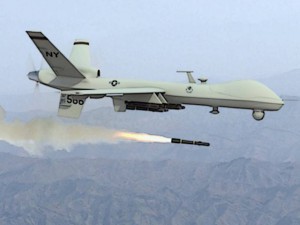 At least 24 militants were killed in two separate US drone strikes in North Waziristan and Pakistan, Afghanistan border on Saturday.

At least four militants, including a top commander of the banned Tehrek-e-Taliban Pakistan, were killed and several others were injured in a US drone strike in the Mangrooti area of the North Waziristan.

The target of the drone strike was a militant hideout at Mangrooti, a village situated on boundaries of North Waziristan with Afghanistan in snow-covered Shawal mountainous region in Data Khel Tehsil.

The deceased included Maulana Noor Saeed belonging to Jani Khel, Frontier Region. However, identities of other militants killed in the strikes couldn’t be ascertained as yet.

Earlier today at least 20 militants were killed in a US drone strike near the Pakistan, Afghanistan border. Officials said the militants were suspected to belong to the Islamic State militant group.

There have been several drone strikes near the Pak-Afghan border in the past with recent targets being IS hideouts. Nazyan is one of the two districts left under the control of the militant group as it recently lost control of two districts in Nangarhar province.

Earlier this week, the Taliban captured a stronghold of the IS’s Khurasan chapter in the Afghan province of Nangarhar after three days of fierce fighting that claimed over 150 lives on both sides.

Saad Muradi, a front-line man of IS, also known by its Arabic acronym Da’ish, was also killed in the three-day long battle, according to officials monitoring the Pak-Afghan border in Khyber Agency. “The Taliban now control Batitkot and Chaparyal areas which were captured over the last two days while Nazyan fell today,” one official said.

Banned TTP chief Mullah Fazlullah had survived a drone strike in Nazyan, while several IS fighters have been killed in the region in the US drone campaign. Local sources confirmed the development, saying more than 2,500 Taliban fighters were involved in the battle. They added that over 150 fighters were killed in fighting which is ongoing. “Of them, 35 are Taliban fighters.”