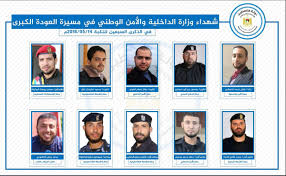 At least 24 of the 61 Palestinians killed Monday in the Gaza border riots were terrorists affiliated mostly with the Hamas terrorist organization, with some being members of the Palestinian Islamic Jihad, the IDF Spokesperson’s Unit said Tuesday, following a joint investigation conducted by the IDF and the Shin Bet.

Violent clashes erupted Monday between Palestinian protesters and the IDF on the Gaza border on the backdrop of the opening of the new US Embassy in Jerusalem. This is the highest Palestinian death toll since Operation Protective Edge in 2014.

IDF fighter jets and tanks then attacked Hamas targets in a training camp in Jabalia, in the northern Gaza Strip, following earlier attempts to plant an explosive device on the fence and gunfire at soldiers.