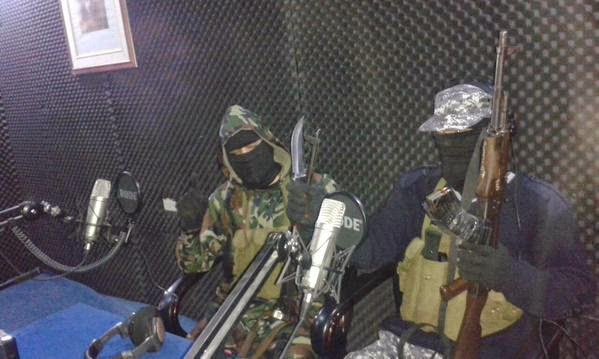 Gunmen claiming to be members of the Islamic State group have seized control of a state-run radio station in Libya’s coastal city of Sirte, residents said Friday.

“They took Radio Sirte yesterday (Thursday). Since then they have been broadcasting (verses from) the Koran and speeches by (IS chief Abu Bakr) al-Baghdadi,” a resident of the central city told AFP by telephone.

The resident said speeches of IS spokesman Abu Mohammed al-Adnani were also being played on the air.

A former local administration official said the gunmen have also set up a headquarters in the centre of the city, and voiced concern that they could declare an Islamic emirate in Sirte.

“They could take advantage of the absence of any central government authority to transform the city into an Islamic emirate as they did in Derna,” an eastern city held by jihadist groups including IS.

The man, who declined to be named, said the gunmen apparently seized the radio “as a first step to communicate with the population”.

“The situation in Sirte is very complex,” he said, because many radical groups have a foothold there.

Since the 2011 uprising that toppled and killed dictator Moamer Kadhafi, Sirte, the former strongman’s hometown has become a stronghold of extremist groups.

Sirte is a bastion of Ansar al-Sharia, an Islamist blacklisted by the United Nations and the United States.

And militias of the Islamist-backed Fajr Libya (Libya Dawn) coalition control some parts of Sirte, and launching attacks against key oil installations nearby in December.

Powerful militias, backing rival governments and parliaments, have been battling for control of key cities and the country’s oil riches since the uprising.

Amid the chaos, IS has made an appearance in Libya where it has claimed a series of deadly attacks. The latest targeted a luxury hotel in Tripoli on January 27, when nine people were killed, five of them foreigners.