You are here: Home / Senza categoria / The use of children by ISIS a danger for the future 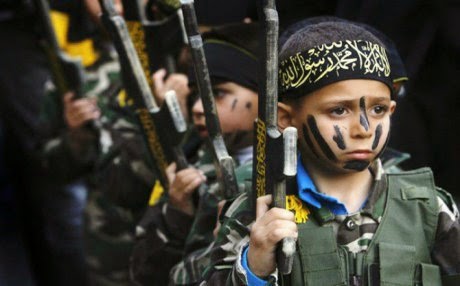 The radical Muslim group ISIS is actively using children in its war effort, and viewing them as the future generation of a “Caliphate” that occupies parts of Iraq and Syria. This systematic violation of international laws does not receive enough attention by far, although it is a dangerous precedent for the future.
Kids play a role in guarding and looking after wounded ISIS fighters and are actively involved in the fighting. In Mosul, they guard checkpoints and busy crossroads. In Raqqa they are used as cooks or guards and also to spy in their own neighbourhoods, reporting on anti-ISIS sentiments. According to reports of UN organizations and others, dozens of them have been used as suicide bombers.
In preparation, children are indoctrinated and trained. Yezidi boys as young as 10, who escaped from ISIS, have said they were starved and beaten to force them to repeat verses of the Quran. Those who eventually succeeded were transferred to special training camps, where they are turned into fighters.
ISIS has adapted the school system in the areas under its control to fit its ambitions. “The boys study at school not to learn, but to become mujahideen,” a father from Fallujah complained to The Associated Press. He left the city with his family once he understood how his son was being indoctrinated at school.
Around Raqqa there are at least five camps for youths. In the Osama Bin Laden Camp and Sharia Camp, boys under 16 are taught Arabic and how to read the Quran, but also receive physical and military training.
ISIS is said to seek the agreement of parents, but there are reports of pressure — sometimes even death threats and of payments. Many parents have fled in a bid to prevent ISIS from changing their children into fighters.
Kids that Western volunteers for the jihad bring along to Syria also join the lessons and training. One of them, a six-year-old from Belgium, is seen in a report of Vice News from Raqqa, pledging to become a jihadi. “To kill the unbelievers, for they kill the Muslims,” he states.
In videos on the Internet ISIS shows how it trains the new generation. A group of boys aged around 10 take part in some kind of drill to toughen them. The boys are all dressed in long black shirts over black trousers and are kicked in the stomach and sides by their young teacher. Afterwards, they run into a field with their Kalashnikovs, to shoot and hide.
More recent are images of a boy of around 12, who shoots two Russian spies in the head, execution style, without even flinching. Even though experts do not agree whether the video is authentic, the boy also features in another ISIS video with young recruits from Kazakhstan. “We will kill you, oh unbelievers. God willing, we will slaughter you,” one of his young comrades chants.
Experts say children can be indoctrinated much faster than grownups. They can be fooled easier, as they cannot make comparisons. That is true for the Syrian Kurdish teenager, Mariwan, who was captured together with 150 other students, but released after four months. They were locked in a school, where they were taught ISIS ideology and were shown videos of beheadings.
After returning to his family, Mariwan said in an interview with CNN that ISIS “is right” and that “Kurds are infidels.” In the beginning he was scared to be killed, “but then we found they don’t just kill without checking if someone is an infidel,” he said.
Children are also sent to the fronts. Other rebels in Syria report that they “regularly” see them there, or find their dead bodies. A UN children’s rights group reported recently that ISIS uses children as suicide bombers — amongst them mentally impaired kids who probably don’t realize what is happening.
Once they have become soldiers, children can add their names to lists of volunteers for suicide attacks, as 17-year-old Amr told Human Rights Watch (HRW) after he left ISIS. Because the children around him signed on, he felt obliged to do so too, he said, “with reluctance and way down the list, so there were hundreds of names above mine.”
Recruiting and using children for a war is against international laws. A special research team of the United Nations concluded that ISIS is thus “in a systematic and organized manner” committing war crimes. The Independent International Commission of Inquiry for Syria interviewed 300 people who fled ISIS territory, or are still living there.

It studied pictures and videos and based on that concluded that ISIS “prioritizes children as a vehicle for ensuring long-term loyalty, adherence to their ideology and a cadre of devoted fighters that will see violence as a way of life.”
Other groups fighting in Syria also recruit children, but not in the same, systemic way as ISIS. For the latter it is part of its strategy and ISIS calls the youth a “generation of lions, protectors of faith, dignity and land.”
The big questions are whether there is a life for a child after ISIS, and whether the Caliphate will indeed live on through children. Will they be even more vicious, since they will have never known anything else?
Whatever the answers, the world has to be aware of the danger, for society and for the children themselves.