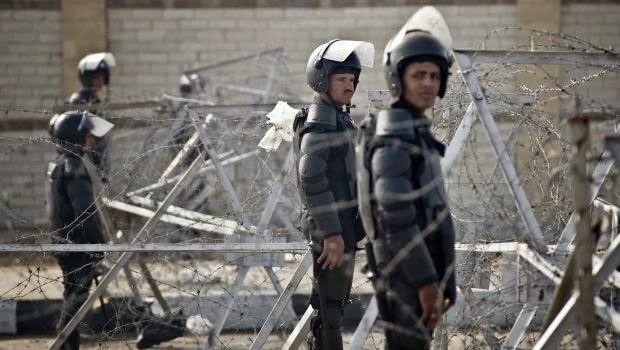 The report which Asharq Al-Awsat obtained a copy of is the result of security cooperation between Egypt, Russia and other countries in the region.

Jihadist forces have increased attacks on government forces and infrastructure in Egypt after former Islamist president Mohammed Mursi was removed from power following a popular uprising in July, 2013. Egyptian authorities subsequently outlawed the Muslim Brotherhood, claiming it was responsible for terrorist attacks in Cairo.

The report also reveals that the Islamist group established an operations room in an unidentified Mediterranean country where its members hold regular meetings with members of other radical groups.

“[The Brotherhood] is betting on the deteriorating situation in Libya to ensure the flow of weapons to extremists in neighboring countries and to support terrorist operations in Sinai,” the report said.

Egypt stepped up security along its border with war-torn Libya to the west and Islamist-ruled Gaza to the north-east as part of its stepped up response to terrorist activity.

The new restrictions on the Brotherhood prompted several of its members to flee to the deserts of Sinai and Libya, setting up training camps and preparing attacks.

Security officials from Egypt and Russia held a series of meetings on the sidelines of President Vladimir Putin’s visit to Cairo last week.

Speaking to Asharq Al-Awsat on the condition of anonymity, a Libyan military expert who attended the meeting in Cairo said officials discussed the expansion of ISIS in neighboring Libya, particularly in oil-rich areas.

The talks also touched on the West’s receding interest in the growing presence of Islamist groups in Africa.
In exclusive comments to Asharq Al-Awsat, Maj. Gen. Mohamed Bilal, a senior Egyptian military official who commanded Egyptian forces in the Gulf War, said the time had pasted to take reports of the Brotherhood’s alliance with radical groups seriously.

“The world is focusing on fighting ISIS in Iraq and Syria, leaving other countries to face extremists on their own,” Bilal said.

Adviser to Egypt’s Nasser Military Academy Brig. Gen. Adel El-Umda warned of “the massive funding that the Brotherhood and extremists” are receiving.

A memo recently circulated among Arab, Egyptian and African officials suggests that the Brotherhood is now seeking to establish a foothold in Algeria.

Also on the group’s agenda are plans to pressure the new rulers of Tunisia to ease restrictions on the Islamist Ennahda movement. After some precise political maneuvering, Tunisian Prime Minister Habib Essid was able to push through a national unity government—including Ennahda ministers.

The former jihadist who previously operated in Afghanistan said Arab governments should crackdown on any Brotherhood-related investments in order to cut off all sources of funding.

“The group has made billions of US dollars in running aid agencies, charities and other companies. Bombings and violence will continue as long as their finances are able to move across borders,” he said.