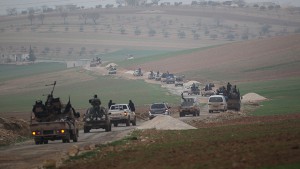 About 2,200 Russian nationals are fighting among the ranks of the terrorist groups in Iraq and Syria, Russian deputy foreign minister told TASS news agency on Tuesday.

Oleg Syromolotov, the Deputy Foreign Minister for anti-terrorism, was quoted by TASS, as saying: “At the time being, there are around 2,200 people from Russia who are engaged in the fighting in Syria and Iraq,” stressing that, “the figures start getting really alarming.”

“There are about 500 among them who have come from Europe, where they had previously obtained their citizenship, residence permit or refugee status,”

“We are thoroughly analyzing belligerent statements made by ISIS leaders on transition of the jihad to the area of Northern Caucasus and in Central Asia,” Syromolotov also added.

Noteworthy, Sergei Smirnov, deputy chief of the Federal Security Service (FSB), stated on April, 12, that nearly 1,700 Russian-born fighters have joined the ISIS to fight in Iraq and Syria.