You are here: Home / Senza categoria / 5,000 foreign fighters flock to Libya as ISIS call for Jihadists 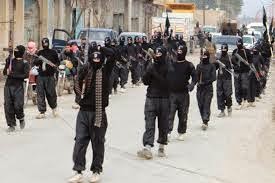 Over 5,000 foreign fighters have flocked to Libya to join the ranks of radical Islamist groups such as the Islamic State (ISIS), according to the country’s foreign minister, Mohammed al-Dairi.
Al-Dairi, in comments made to the Libyan news outlet The Libya Herald, said there were many “terrorist leaders” who had arrived in the country from foreign countries, joining terror groups such as ISIS and Ansar al-Sharia.
In a recruitment video released last week, an ISIS militant called for jihadists from Saudi Arabia, Tunisia and Egypt to immigrate to Libya. Last month, Libya’s army spokesperson also claimed that the biggest ISIS camp in the country was situated just 45km (27.9 miles) from the Tunisian border and a number of Tunisian foreign fighters had carried out suicide bomb attacks in the eastern city of Benghazi.
The country has descended into chaos since 2011 when Colonel Muammar Gaddafi was removed from power at the height of the Arab Spring. Libya now has two governments jostling for legitimacy – the internationally-recognised government who are based in the eastern coastal town of Tobruk, and the Islamist-backed General National Congress (GNC) based in the capital, Tripoli.
ISIS have allegedly appointed two emirs, both foreign nationals, to oversee both sides of the country. The ‘Emir of Tripoli’, a Tunisian known as Abu Talha, controls the group’s operations in the west and a Yemeni national Abu al-Baraa el-Azdi, based in the town of Derna, which the group control.
Mohamed Eljarh, Libyan analyst and non-resident fellow with the Atlantic Council’s Rafik Hariri Centre for the Middle East, says that fighters entering Libya from other countries is part of ISIS’s plan to gain more territory in the country.
“I believe that this is part of the Islamic State’s strategy,” he says. “They are seeking to overtake territory, entire cities and towns and entire states. That is their strategy. The flow of fighters is in line with this strategy in order to take over failed states such as Libya, Iraq and Syria.”
Al-Dairi also repeated the government’s call for the international community to help prevent the flock of jihadists to the country and the proliferation of terror in the country beset by unrest. Last month, Libyan prime minister Abdullah al-Thinni requested that the West launch air strikes against al-Qaeda and ISIS cells in the country.
“I ask world powers to stand by Libya and launch military strikes against these groups,” he said. “This threat will move to European countries, especially Italy.”
However, both the U.S. and Britain have rejected the calls to lift the embargo as the country does not have a unified government that the international community can support militarily.
“The problem is that there isn’t a government in Libya that is effective and in control of its territory,” British foreign secretary Philip Hammond said in a visit to Spain last month. “There isn’t a Libyan military which the international community can effectively support.”
“Simply pouring weapons into one faction or the other, which is essentially what has been proposed, is not to bring us to a resolution to the crisis in Libya, and is not going to make Europe safer, is going to make it more at risk,” he added.
Despite Hammond’s desire to maintain the embargo a new UN report, released last week, said that it is “almost nonexistent” as the chaos in the country has allowed for the proliferation of arms. The report said that weapons were also flowing in the opposite direction, reinforcing “the military capacity of terrorist groups operating in different parts of the region, including Algeria, Egypt, Mali and Tunisia.”
British MP Daniel Kawcynski has called for tougher action by the government in Libya. Kawcynski, chairman of the All Party Group for Libya in the British parliament, warned yesterday that ISIS would attain “defacto control” of the North African country if Britain refused to act.
“We simply cannot stand by and let this humanitarian tragedy escalate day by day without any retaliation against ISIS and the other Islamist terrorist groups who are responsible for it,” he said in an open letter to prime minister David Cameron.
“Accordingly, we would urge you to negotiate urgently with the Italian and Egyptian authorities and other allies to authorise immediate and targeted joint air strikes against IS [Islamic State] targets in Libya.”