You are here: Home / West Asia / 22 killed in blast at Pakistan market 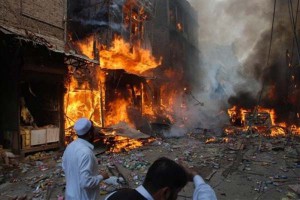 A bomb explosion in a market has killed 22 minority Shiite Muslims and wounded 45 others in Pakistan’s Kurram tribal region near the Afghan border.

The bomb exploded as the market in the town of Parachinar was crowded with shoppers buying warm clothes for winter, said Mahtab Hussain, a local government official.

Husain said some of the critically wounded were airlifted to hospitals in other cities.

The explosion was caused by a remote-controlled bomb planted in the market, the officials said.

Parachinar is the main town in the Kurram tribal region, a predominantly Shiite Muslim area which has been troubled by Islamic militant and sectarian violence. Pakistan’s military has carried out regular operations in the region to eliminate militants and control sectarian strife.

No one immediately claimed responsibility for the attack.

The Taliban and allied Islamic militants have been waging a war against the state for over a decade, killing tens of thousands of people.