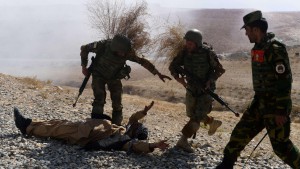 The attacks occurred at dawn after hundreds of Taliban militants stormed from the west, north and east of the city, 250 km north of Afghan capital of Kabul, sparking heavy clashes.

“Two killed and nearly 40 wounded were admitted to hospitals in Kunduz city following the fighting in Kunduz city this morning. Most of the injured were civilians, who received shrapnel and bullet wounds,” Dr. Sahhid Mukhtar, director of the provincial health department, told Xinhua.

The number of casualties may rise as several wounded remained in critical condition, he added.

“The security forces fought back at around 10:00 a.m. local time, forcing the militants to withdraw from many parts of the city. At least 20 militants had been killed while dozens other attackers were injured. Sporadic fighting is still going on in outer sides of the city,” a provincial security source told Xinhua on condition of anonymity.

The province, bordering Tajikistan, was the scene of heavy fighting earlier this year as security forces repelled militants who tried to take control of several districts near Kunduz city.

The Taliban has intensified attacks over the past couple of months since the Afghan security forces assumed the full security responsibility from NATO-led troops on Jan. 1.