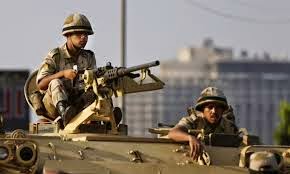 Foreign Minister Sameh Shokry said on Saturday that military intervention in Libya, as part of an international alliance following the abduction of 21 Coptic Egyptians by the terrorist Islamic State group a few weeks ago, requires accurate calculations.
During a press conference the minister said, “Due to the intersection of the Libyan and Egyptian borders, as well as the presence of such large numbers of Egyptians in Libya, a decision on military action should be taken in accordance with accurate calculations. They should be carried out under suitable circumstances. Variables need to be considered.”
The minister said he will contact his Saudi, Emirati and Jordanian counterparts, as well as the European Union and other parties to prepare the international scene for any potential developments.
Shokry has already declared his participation in the anti-terrorism conference Washington will hold on Wednesday. While there, he will target communication with a large number of international partners to present the Egyptian viewpoint on Libya, as well as other terrorism-related issues.
There is also the possibility of visiting New York, where Shokry could meet with UN Security Council members and Secretary General Ban Ki-Moon. International efforts against IS in Syria and Iraq are of a specific nature as they are carried out through aerial strikes and without a direct threat to the lives of citizens.
Shokry said he’d had several talks with Addis Ababa as well as foreign ministers from the US, France, England and Russia since the start of the kidnapping crisis.
He added that the ministry is closely following the situation in Libya, indicating measures have been taken to protect Egyptians there.
Shokry denied news circulated by the Libyan parliament over the murder of the abducted Egyptians saying information should not be spread without being verified.
In related news, Bishop Botros Fahim, of the Catholic Copts in Minya, announced three days of fasting as well as daily mass at all of the Minya Catholic dioceses.
In a statement on Saturday, Fahim expressed solidarity with the families of the detainees held by the IS in Libya.
“We will pray and fast for three days, from Monday to Wednesday, for the 21 Egyptians and their families,” he said.
Meanwhile, Coptic activist Karim Kamal expressed concern over the situation in Libya.
“What Egyptians suffer in Libya is very disappointing. This is not the first time Egyptians have been kidnapped and killed in Libya,” Kamal said in a statement on Saturday.
He refused to say whether they were kidnapped based on their religious backgrounds, stressing instead the necessity of evacuating all Egyptians who are working in Libya.
Source:  egyptindependent