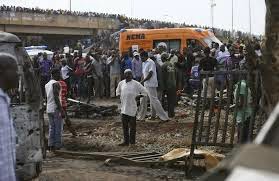 A bomb exploded in a crowded bus station in the northeast Nigerian city of Damaturu on Sunday, causing casualties in a region that has been frequently attacked by Islamist militants, witnesses said.

Witness Adamu Muhammad said he heard a loud blast and the people at the Damaturu’s central motor park “descended into panic.”

He said there were many casualties, though he did not know how many. The Nigerian military was not immediately available for comment. No one claimed the attack, which bore the hallmarks of Islamist insurgent group Boko Haram.

On Saturday, heavily armed Boko Haram militants attacked and attempted to overrun the northeastern Nigerian city of Gombe but were later repelled.

Boko Haram’s violent uprising for an Islamic state has killed thousands, destabilised the northeast of Africa’s biggest economy and is increasingly doing the same to neighbours Cameroon, Chad and Niger. They are now fighting back in a regional effort to crush the militant group.

The insurgency has also cast doubt over the leadership of Oresident Goodluck Jonathan, who is seen as not having done enough to contain it or protect civilians, hundreds of whom have been kidnapped.

Nigeria has postponed for six weeks a presidential election that had been due to be held on Feb. 14, citing the security threat from Boko Haram.