You are here: Home / Senza categoria / 26 dead as Shi’ite Houthis and Sunnis clash in Yemen 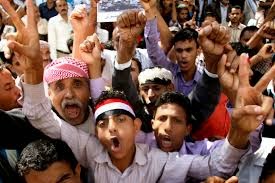 Tens of thousands of Yemenis demonstrated in several cities on Saturday against the rule of the Shi’ite Muslim Houthi movement as clashes between Houthis and Sunnis in a southern mountainous region left 26 dead.

It was the second day of nationwide demonstrations against the Iranian-backed Houthis in less than a week after their dissolution of parliament this month unravelled security and sent Western and Arab embassies packing. Houthi gunmen fired on protesters in the central town of Ibb and wounded four, medics said.

Activists said they were enraged by the death on Saturday of Saleh al-Bashiri, who they say was detained by gunmen as they broke up an anti-Houthi protest in Sanaa two weeks ago and was released to a hospital with signs of torture on his body on Thursday. There was no immediate comment from the Houthis.

Yemen’s upheaval has drawn international concern as it shares a long border with top world oil exporter Saudi Arabia. It is also fighting one of the most formidable branches of al Qaeda with the help of US drone strikes. Heavy clashes between Houthi fighters and Sunni Muslim tribesmen fighting alongside al Qaeda militants in the rugged southern province of al-Bayda on Saturday killed 16 Houthi rebels along with 10 Sunni tribesmen and militants, security officials and tribal sources told Reuters.

Two weeks after the Houthis took formal control of the capital and continued an armed push southward, Yemen appears to be barely functioning as a state.

Gulf foreign ministers on Saturday urged the United Nations Security Council to pass a “Chapter 7” resolution authorising economic or military force to compel the Houthis to back down, Saudi-owned Al Arabiya TV said.

The Houthis say they are trying to drive out corrupt officials and avert economic ruin. They have dissolved parliament and set up their own ruling body earlier this month. The Houthis’ advance from the north towards well-armed tribal regions in the east and south has led locals to make common cause with Al Qaeda in the Arabian Peninsula, one of the deadliest arms of the global Sunni Muslim militant organisation.