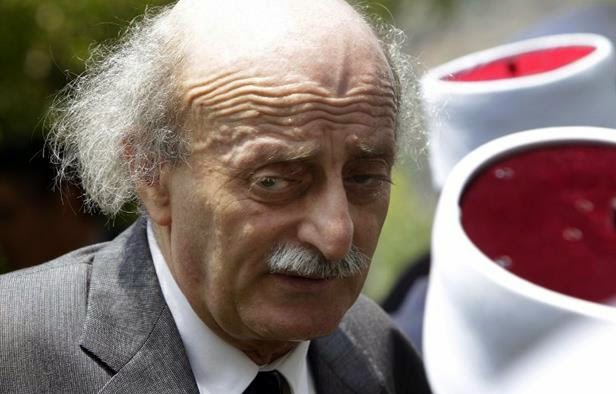 Mediated by a member of the opposition Syrian National Coalition (SNC), the talks between al-Qaeda affiliate Al-Nusra Front (ANF) and Lebanese MP Walid Jumblatt were successful, culminating in an agreement regarding the Druze community in the Syrian city of Idlib. The agreement reportedly requires the local Druze to convert to Sunni Islam and demolish their shrines, in return for ANF suspending Sharia-sanctioned punishments against them.

Walid Jumblatt’s declaration that ANF is not a terrorist group has not helped protect the Druze community in Syria and Lebanon, just as the support voiced by some Syrians for Daesh’s “other face” has not helped protect them from the ANF’s brutality, murder, and displacement. Indeed, Sunni Muslims have been targeted and tormented by the radical jihadi groups as much as — if not more than — other religious communities and tribes in Syria and Iraq.

Though Jumblatt has so far succeeded in averting the execution of the kidnapped Lebanese soldiers (the Druze soldiers) by exonerating ANF — which is proving adept at exploiting internal Lebanese political dynamics — the efforts of the head of the Progressive Socialist Party (PSP) have failed to dissuade the group from trying to forcibly convert the Druze in Jabal al-Summaq, northern Syria, to the Wahhabi brand of Islam.

Jumblatt previously called on the Druze to “return to Islam.” He has spared no occasion to proclaim that ANF is part of the fabric of the Syrian society, while PSP minister Wael Abu Faour said two weeks ago in a television that the al-Qaeda affiliate “includes doctors and engineers” in its ranks. Similarly, Walid Jumblatt has jumped at every opportunity over the past two weeks to try to dissuade Druze religious leaders in Lebanon from speaking out about the plight of their coreligionists.

A month and a half ago, Abu Abdul-Rahman al-Tunisi, ANF’s emir to Jabal al-Summaq, gave 14 Druze villages until February 1 to demolish their shrines and renounce their faith, or face the consequences. The residents of the villages complied, and forged an agreement with ANF representatives to that effect. The people of these 14 villages proceeded to demolish their shrines, and agreed to let ANF imams lead them in prayers in their temples, which were converted to mosques. But ANF was not satisfied. A number of its fighters ransacked the Druze shrines, while al-Tunisi vowed to enforce full-blown Sharia provisions in their villages.

Only Sheikh Ali Zine al-Din, the head of the Druze Irfan Foundation in Lebanon, denounced what happened publicly. This outrage among the ranks of Druze clerics put pressure on Jumblatt. This, in addition to the issue of the kidnapped Druze soldiers, whose families threatened to escalate their protests and to react fiercely if something happens to their relatives, compelled the head of the PSP to act.

Jumblatt visited Turkey two weeks ago. It is no longer a secret that Turkish intelligence services coordinate with ANF in northern Syria, just as the Israeli intelligence services do in southern Syria. Jumblatt, who failed in the past to obtain guarantees from Turkey, Saudi Arabia, and the West, to protect the Druze, heard the same thing this time, and was told that there could be no guarantees.

The head of the PSP contacted the SNC for help. According to reports from Jabal al-Summaq, Abu Udai, an SNC member residing in the UAE, became involved in the affair as a mediator. Abu Udai visited Jabal al-Summaq with an ANF sharia judge from Saramda (north of Jabal al-Summaq), and had lunch in the town of Kaftin with village leaders. Abu Udai carried an acceptance by Jumblatt that the Druze convert and demolish their shrines, in return for ANF protection.

In addition, Jumblatt tasked his son Timor and a number of PSP ministers to visit Druze religious leaders in Lebanon including Sheikh Amin al-Aridi, to brief them on the developments and the agreement reached with ANF. Naturally, the Druze and their leaders want the “agreement” to succeed.

However, al-Tunisi did not want to break the rule established in the past few years, namely, that terrorist groups do not keep their promises, as one source in March 8-affiliated Druze groups put it. Indeed, reports indicate a meeting was held between al-Tunisi and village leaders in which the former said he would continue to seek to force comprehensive Sharia provisions on the Druze. The residents fear things could deteriorate further with al-Tunisi asking their men to shave their moustaches and leave their beards, or worse, to offer their women for marriage to ANF fighters.

South Lebanon and South Syria
Jumblatt’s overtures to ANF are not just about these issues. A friend of the PSP leader from March 8 believes Jumblatt and his team are convinced ANF is going to take full control of the Syrian south by the end of 2015. At a lunch attended by Wael Abu Faour and security leaders in Rashaya in mid-December 2014, Abu Faour reportedly said, “Our information indicates ANF will control the Syrian south and Mount Hermon with the end of 2015, bringing them to the border with the central and western Bekaa, as well as Rashaya and Hasbaya.”

Instead of preparing to fight ANF, Jumblatt gave PSP members in Rashaya and the “Popular Committees” in the southwest Damascus countryside orders to conceal their weapons because there was no cause for concern, according to both PSP and March 8 sources in Rashaya.

Moreover, Lebanese security sources say that Mohammad al-Numani, a leader in the Ahrah al-Sham Movement who was kidnapped by Baathists in December 2014 in the Bekaa, and handed over to Syrian intelligence services, was assisted by PSP members in Rashaya in his efforts to enter Lebanon. Security sources, however, deny that this was done at the orders of the PSP.

According to Syrian security sources that spoke to Al-Akhbar, Numani confessed that he was trying to establish cells for his group in the central and western Bekaa, to operate in coordination with ANF fighters in Kfir Yaboos, Yaboos, and Zabadani and open a gap from the Lebanese side, as well as to attack Syrian and Lebanese army positions on both sides of the borders and link the battlefronts from the Damascus road to Mount Hermon.

Israel, Jordan, and Al-Nusra
The Israeli and Jordanian intelligence services are not absent from the general Druze landscape. While Hezbollah Secretary General Hassan Nasrallah alluded to the alliance between ANF and Israel in Quneitra and Daraa in a recent speech, Speaker Nabih Berri went beyond that in a parliamentary meeting held a month ago.

Berri told MPs present at the meeting that Israel was working hard to coax the Druze into an alliance, and establish a buffer zone in northern Golan. Israel, Berri said, claimed this would protect the Druze from ANF terrorists, who, the speaker said, are also backed by Israel. Berri reportedly told the MPs he had contacted Jumblatt, who said he would visit Jordan to inquire about these reports.

In parallel, the Jordanian intelligence is said to have invited a number of Druze religious leaders from Syria and Lebanon to visit Amman routinely, to meet with Palestinian Druze collaborating with Israel. The purpose is to encourage the Druze in south Syria to collaborate with Israel and abandon the Syrian state and the new resistance movement emerging in Mount Hermon.