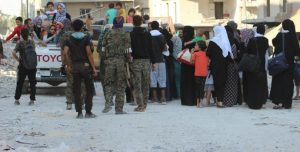 The operation launched by Syrian Democratic Forces (SDF) on June 6 to liberate Raqqa from ISIS continues at full force in its 73rd day, like reported by anfenglish.com.

Recent reports from the battle in the city are as follows;

In the Rashid neighbourhood on the eastern front, 6 ISIS members were killed. The gangs attempted an attack with a mine-laden vehicle near the Children’s Hospital in the Old City, but the vehicle was destroyed by the fighters before it managed to reach its target.

5 ISIS members were killed during brief clashes in al-Diriyah neighbourhood west of the city.

The neighbourhood of al-Barid also witnessed clashes, during which 3 ISIS members were killed and a bomb-laden vehicle of the gangs was destroyed.

During the mop-up operations in Nazlat Shehade neighbourhood, SDF fighters discovered a tunnel of the gangs.

On the other hand, SDF forces have rescued 50 civilians stranded inside the circle of ISIS.