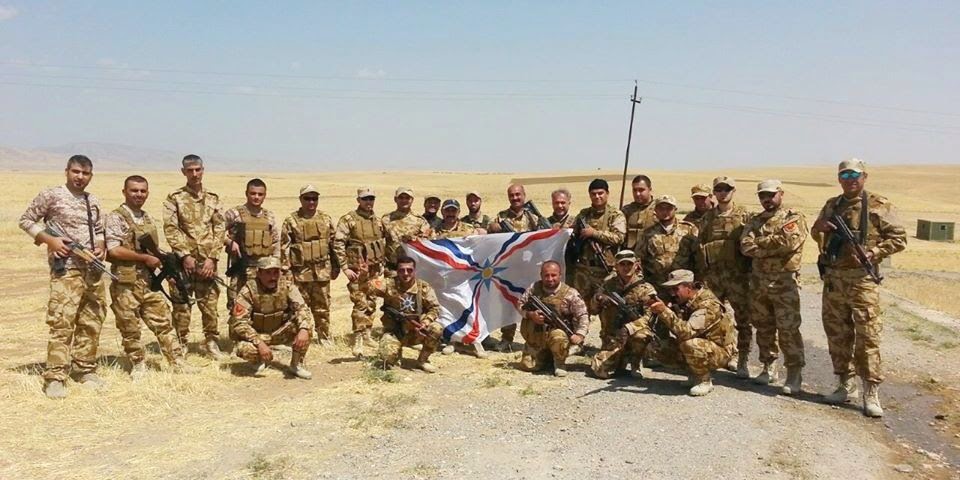 Saint Michael, the archangel of battle, is tattooed across the back of a U.S. army veteran who recently returned to Iraq and joined a Christian militia fighting Islamic State in what he sees as a biblical war between good and evil.

Brett, 28, carries the same thumb-worn pocket Bible he did whilst deployed to Iraq in 2006 – a picture of the Virgin Mary tucked inside its pages and his favourite verses highlighted.

“It’s very different,” he said, asked how the experiences compared. “Here I’m fighting for a people and for a faith, and the enemy is much bigger and more brutal.”

Thousands of foreigners have flocked to Iraq and Syria in the past two years, mostly to join Islamic State, but a handful of idealistic Westerners are enlisting as well, citing frustration their governments are not doing more to combat the ultra-radical Islamists or prevent the suffering of innocents.

The militia they joined is called Dwekh Nawsha – meaning self-sacrifice in the ancient Aramaic language spoken by Christ and still used by Assyrian Christians, who consider themselves the indigenous people of Iraq.

A map on the wall in the office of the Assyrian political party affiliated with Dwekh Nawsha marks the Christian towns in northern Iraq, fanning out around the city of Mosul.

The majority are now under control of Islamic State, which overran Mosul last summer and issued am ultimatum to Christians: pay a tax, convert to Islam, or die by the sword. Most fled.

“These are some of the only towns in Nineveh where church bells ring. In every other town the bells have gone silent, and that’s unacceptable,” said Brett, who has “The King of Nineveh” written in Arabic on the front of his army vest.

Brett, who like other foreign volunteers withheld his last name out of concern for his family’s safety, is the only one to have engaged in fighting so far.

The others, who arrived just last week, were turned back from the frontline on Friday by Kurdish security services who said they needed official authorisation.

“STOP SOME ATROCITIES”
Tim shut down his construction business in Britain last year, sold his house and bought two plane tickets to Iraq: one for himself and another for a 44-year-old American software engineer he met through the internet.

The men joined up at Dubai airport, flew to the Kurdish city of Suleimaniyah and took a taxi to Duhok, where they arrived last week.

“I’m here to make a difference and hopefully put a stop to some atrocities,” said 38-year-old Tim, who previously worked in the prison service. “I’m just an average guy from England really.”

Scott, the software engineer, served in the U.S. Army in the 1990s, but lately spent most of his time in front of a computer screen in North Carolina.

He was mesmerised by images of Islamic State militants hounding Iraq’s Yazidi minority and became fixated on the struggle for the Syrian border town of Kobani — the target of a relentless campaign by the jihadists, who were held off by the lightly armed Kurdish YPG militia, backed by U.S. air strikes.

Scott had planned to join the YPG, which has drawn a flurry of foreign recruits, but changed his mind four days before heading to the Middle East after growing suspicious of the group’s ties to the Kurdistan Workers’ Party (PKK).

He and the other volunteers worried they would not be allowed home if they were associated with the PKK, which the United States and Europe consider a terrorist organisation. They also said they disliked the group’s leftist ideology.

The only foreign woman in Dwekh Nawsha’s ranks said she had been inspired by the role of women in the YPG, but identified more closely with the “traditional” values of the Christian militia.

Wearing a baseball cap over her balaclava, she said radical Islam was at the root of many conflicts and had to be contained.

All the volunteers said they were prepared to stay in Iraq indefinitely.

“Everyone dies,” said Brett, asked about the prospect of being killed. “One of my favourite verses in the Bible says: be faithful unto death, and I shall give you the crown of life.”