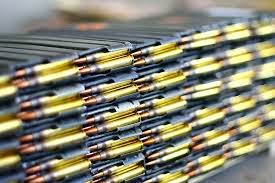 After increasingly strained relations with the US, Egypt is now seeking to diversify its sources of weaponry, Egyptian military experts told Daily News Egypt on Sunday.
Egypt is set to finalise its purchase of 24 Rafale fighter jets, a naval frigate, and other related military equipment on Monday, after French President Francois Hollande announced the $5.70bn deal Thursday.
Ongoing visits between Al-Sisi and Russian President Vladimir Putin have resulted in enhanced military and economic relations. The two presidents signed a preliminary agreement to build a joint nuclear power plant during Putin’s last visit to Cairo on 10 February. In a more symbolic move, Putin gifted Al-Sisi a Kalashnikov rifle.
Egypt is currently following a policy of diversifying its sources of military aid and weaponry, military expert Hussam Sweillam and former military general Yehya Sanjak said.
“There is an American monopoly of military aid,” Sweillam said, adding that the US “puts pressure on Egypt through the $1.3bn annual military aid”.
US made equipment accounts for 60% of Egypt’s current military equipment, while the remaining 40% are old Russian weapons, he added.
Hollande claimed in his Thursday statement that Egypt will buy the aircrafts, “due to the threats that it faces”.
Sanjak said the Rafale fighter jet is one of the most powerful military weapons in the world. He cited “external threats” as the reason the army sought the aircraft, adding that Egypt “is facing a threatening belt from the East from Afghanistan, Pakistan, Iraq, Libya, and Gaza, among others”.
Egyptian military expert and professor Robert Springborg told Le Monde that Egypt’s problem is not that it lacks planes, but that it lacks sufficiently trained pilots. The French-made Rafales are thus not a likely necessity.
When asked how Egypt can afford to buy $5.7bn worth of military equipment while it experiences dire economic conditions domestically, Sweillam stated that the Gulf countries, primarily Saudi Arabia, will finance it.
Both Swiellam and Sanjak likened this historical moment to that of the Soviet Union ending its military aid to Egypt in the late ‘70s. “We suffered when the Soviet Union stopped supplying us with fighter jets,” Sweillam stated.
“Anwar El-Sadat had to turn to France back then to make up for lost Soviet weapons and after the Camp David accords, he replaced the Soviet Union with the US, which has been providing us with aid since then,” Sanjak said.
The former military general said he believed President Abdel Fattah Al-Sisi is following in El-Sadat’s steps, only the former is turning to Russia.
“America is free to do what it wants,” Sanjak said. “They [the US] previously suspended their military aid, they exhausted us until they gave us the Apache helicopters promised… it is in the best interests of Egyptian national security for us to get weapons from elsewhere then.”
The US Congress’ passing of the 2015 spending bill last December had implications for Egypt’s partially frozen annual military aid, as it appeared to allow a resumption of halted military aid to Egypt.
The bill, like the previous 2014 budget, retained that Egypt must live up to “democratic requirements” for the full disbursement of the full $1.3bn military and economic aid
During Egypt’s 2013 interim-government, the US had consequently halted the transfer of F-16 fighter jets, M1A1 tank kits, Harpoon missiles and Apache helicopters, only to release $572m of the total $1.3bn military aid again in June.
Over the past 35 years, the US has provided over $40bn worth of military aid to Egypt, second only to Israel, according to an Atlantic Council report.
Source:  dailynewsegypt