You are here: Home / Senza categoria / 2016 Candidates Reveal How They Would Defeat ISIS 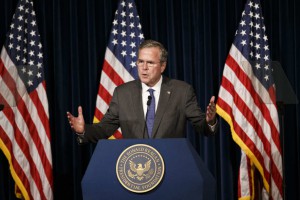 As Hillary Clinton and Jeb Bush squabbled over who caused the failures of the Iraq War this past week, several candidates discussed how they’d handle the current situation in Iraq and Syria – though, as one of the candidates noted, few have unveiled detailed plans for destroying ISIS. “I don’t see anybody on our side coming up with a robust plan that truly would destroy [ISIS],” Senator Lindsay Graham said on Face the Nation.

Of course, he meant anyone except himself. For months the foreign policy hawk has been calling for sending as many as 20,000 U.S. troops to the region, split between Iraq and Syria. He reiterated on Sunday that it’s necessary to put more U.S. boots on the ground. “President Obama’s strategy to destroy ISIL is failing miserably,” he said. “You can’t do this from the air. The Kurds are not the ground component we need to go into Syria. Without Syria being fixed, you’re never going to fix Iraq. And they’re coming here.”

President Obama has repeatedly said that U.S. troops will not engage in ground combat, but there are around 3,500 U.S. forces training and assisting Iraqi forces in the fight against ISIS. Republican candidates are split on whether more U.S. troops should be sent to the region. Last week on Morning Joe, Donald Trump said defeating the terrorist group will require cutting off their funding sources, and also sending more U.S. forces. “Every place where they have oil I would knock the hell out of them,” he said. “I would knock out the source of their wealth, the primary sources of their wealth, which is oil. And in order to do that, you would have to put boots on the ground. I would knock the hell out of them but I’d put a ring around it and I’d take the oil for our country.” He was pressed about the issue again on Sunday, when Meet the Press‘s John Dickerson noted that taking back Iraq’s oil field would require U.S. ground troops. “That’s okay,” Trump replied.

Some candidates have said they’re in favor of more troops on the ground, but they shouldn’t be exclusively American. In May Rick Perry told Iowans, “We must be engaged in a coalition of our Arab allies and the Israelis in that region to eliminate ISIS and I will suggest to you it will take some boots on the ground. It certainly can be our allies’ boots on the ground as well.” Around the same time, Senator Rand Paul, who favors less U.S. intervention abroad, told CNN, “I think ultimately there’s a victory from boots on the ground, but it should be Arab boots on the ground.” He added, “If the Iraqis are not willing to fight for their country, I don’t think I would send more American GIs.”

Carly Fiorina, who said recently that she would hold a Camp David conference to form an ISIS strategy with our allies, noted Sunday on ABC’s This Week that multiple Arab nations are already battling ISIS. “They know this is their fight. Yes, they need leadership, resolve support and material from us. We haven’t provided any of it. And if we did, it will make a big difference,” she said. But Fiorina said there should be some limits on that support, adding, “I disagree that we’re at that point where we need to put tens of thousands of boots on the ground.”

In between arguing over what led to the rise of ISIS, Bush and Clinton have offered their thoughts on defeating the current threat as well. Previously Jeb Bush has called for the immediate removal of Syrian Presiden Bashar al-Assad, but he didn’t mention that plan in his major foreign policy address at the Ronald Reagan Presidential Library on Tuesday. He called for a more aggressive response, saying that more U.S. troops “may well be needed,” and they should have “a greater range of action,” such as embedding with Iraqi units. However, he added, “We do not need, and our friends do not ask for, a major commitment of American combat forces.”

In her response, Clinton suggested that Bush had called for significantly increasing the number of U.S. troops in combat roles. “We have to help the Iraqis get better organized in order to take on the threat of ISIS,” she told Univision. “I view it as a real threat, I view it as something we’ve got to stand up to. But I will not put American troops on the ground to fight ISIS unlike Jeb Bush, who seems to imply in his remarks that that’s exactly what he would do.”