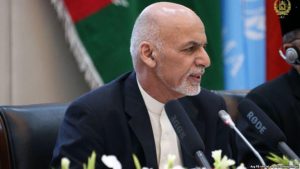 The president of Afghanistan Ashraf Ghani said at the International “Tashkent Conference on Afghanistan” held on 27 March 2018 that the common goal of Afghanistan and Central Asian countries, is the shared economy, like reported by didpress.com.

“Afghanistan and Central Asian countries should have a coherent economy, then they will become an economic pole,” the president said. “If major regional projects implemented, Afghanistan and other countries have done a great job for their people.”

Mr Ghani considered the upcoming politics, economy, peace, stability, regional progress as common, adding that “opportunities are rare and should be used.”
“Instead of opposing policies, ground for cooperation should be created. The key problem that region faces right now should be resolved through cooperation with Afghanistan.

All opportunities should be used for peace “The current conflict underway in the geography of Afghanistan and there should be an opportunity for dialogue,” Ghani said.

According to him, Tashkent conference held because common threats threatening everyone and the aim of the meeting, is to eliminate these threats.

“Cross-border terrorist networks are major threats to Afghanistan and region. These networks know no border and on the other hand, achieve billions of dollars annually through creating insecurity.
“Terrorist networks have common goals and are interlinked. Afghanistan is at the forefront of the fight against terrorism and is fighting these networks,” he added.

Ghani vowed the number of (Khorasan) ISIL members are nearly 2,000, saying the security forces of Afghanistan have launched major operations to suppress insurgents in the past two weeks, killing nearly 1,000 ISIL members.

President Ghani expressed these words while the neighbors of Afghanistan including Iran worries over Daesh taking ground in Afghanistan and accuses America of supporting ISIL group in the country.