You are here: Home / Senza categoria / Salafi community in Bosnia denies links with Islamic State. And the black flags? 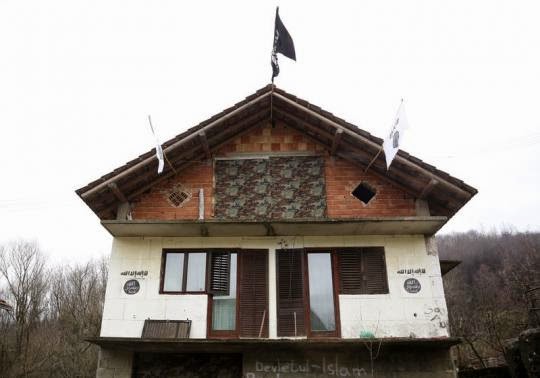 Salafi members in Upper Maoca village in northeastern Bosnia have denied allegations that they are connected with the Islamic State of Iraq and the Levant, or  Daesh — the Arabic acronym for the militant group also known asISIL.

Upper Maoca, situated 25 kilometers from Brcko town and with a population of about 220 inhabitants, has become perceived by many Bosnians as a center for the recruitment of fighters seeking to fight on the battlefields in Iraq and Syria to support Daesh.

But many villagers told The Anadolu Agency they rejected the notion.

Villager Mersed Cekic said: “Anyone who knows Maoca is aware that we do not have an airport, bus station, railway station or port.

“What kind of miracle will fly people from Maoca to Syria?”

‘People misinformed’
Cekic criticized media in general for not adequately informing the public on current events.

He said: “Maybe people have been misinformed by media — where is coverage about the Croats who are traveling to Ukrainian battlefields or Serbs who are supporting the Russian army, or that of a Jew from Brcko who boasted on his website about killing Palestinian children?

“The media does not report much about all that.”

A force of special police raided the village on Feb. 5 after Federal TV published a video showing the Daesh flag and insignia flying from one of the houses in the village.

Villager Edis Bosni told AA: “We have no links with Syria and Iraq, except that they are our brothers in Islam and that we pray God to resolve their situation in the best, painless way.”

‘Great support’
Bosnic said the phenomenon of people traveling to foreign battlefields had been topical for centuries — not just now.

Bosnic stated: “It would be unfair to reduce it to one region or one nation. When Bosnia was at war, people were coming here supporting some ideology or what they thought was right.

“Serbs also had great support from Russians, Greeks, Bulgarians and other nations and Croats had support in Bosnia.”

Hajrudin Ribic from Upper Maoca said he had no information about those who had allegedly travelled to Syria and Iraq.

“I do not have any information of happenings in Syria and Iraq. Information available in the media, for me, is not credible because I do not trust the reports at all, nor those published on television or online,” said Ribic.

‘Devil in the house’
Cekic said Upper Maoca villagers did not have television sets in their homes.

He said: “That is why I do not have TV. Our opinion, according to Islam, is that it is the devil in the house.
“Why? Because children and adults will find immoral content on it.”

“Basically, Islam forbids ugly life. It prohibits vulgar life. It is known in Shariah what Allah has forbidden, and we preserve it. We try to stick to it in our homes with our families. And one of these devils is television,” said Cekic.

Other village inhabitant, Elvis Nukic, said the flag that was shown on TV had been deliberately planted.

“We do not represent extreme views. I think it was planted by those who do not live with us. They planted insignia and the flag. We have nothing to do with that,” said Nukic.